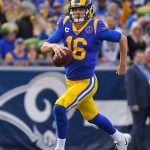 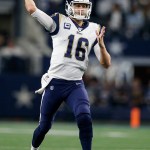 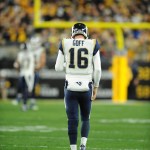 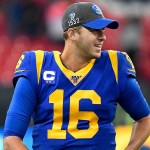 He’ll be one of the youngest quarterbacks to start in a Super Bowl, so can Jared Goff pull off the big one? Get to know the Los Angeles Rams superstar before he plays in one of the biggest games of his life.

On Feb. 3, football fans might see the “Greatest Of All Time” take on a future legend. Tom Brady, 41, will play in his ninth NFL Championship game, leading the New England Patriots into battle in Super Bowl 53. On the opposite end is the young gun of Jared Goff, 24, of the Los Angeles Rams. Will the NFL’s first millennial starting quarterback be able to knock off the man considered the all-time great? Football fans will have to tune in to watch, but before that happens, who is Jared Goff?

1. He’s a young football phenom out of NorCal. Jared Thomas Goff was born in Novato, California, and grew up as a San Francisco 49ers fan (he wears the No. 16 in tribute to Joe Montana.) Though he received offers from Washington State, Fresno State, and Boise State, he chose to attend the University of California, Berkeley. During his tenure with the Golden Bears, he threw for 4,719 yards and 43 touchdowns in 2015 and owns 26 school records, according to ESPN. In 2015, he led the team to their first bowl game since 2008. He threw for six touchdowns to lead the Bears to a 55-36 victory over Air Force in the Armed Forces Bowl.

2. Jared was the overall No. 1 draft pick in 2016. Ahead of the Rams’ return to Los Angeles – having spent 20 years in St. Louis – the team picked Jared as the overall No. 1 draft pick. While he didn’t rack up the wins in college and wasn’t known for having “an absolute cannon for an arm,” according to NFL.com, he works great under pressure. Clearly, something has worked as the Rams have been resurgent since returning to LA.

“I think I’m a good fit,” Jared said after he was picked. “I think how I felt with them and how they felt with me, I think there was similar thoughts about the way the game works, and I’m just excited to go down there and get a chance to work with them.”

3. He comes from a sports family. Jared’s a second-generation sports star, as his father is Jerry Goff, a former Major League Baseball player. Jerry played in the majors for six years (save one trip back down to the minors in 1991), primarily as a catcher, for the Montreal Expos, the Pittsburgh Pirates and the Houston Astros.

My mom and sister are looking great for my big night thanks to @Pantene #NFLDraft #ad pic.twitter.com/hvdQVYFAGi

4. He’s a Swiftie. Jared Goff’s jersey number is 16, but it’s a shame it’s not 13 – Taylor Swift’s favorite number. Jared told ESPN that Taylor is the “coolest celebrity” he’s met since relocating to Los Angeles. “Probably Taylor Swift. I got hooked up backstage at her Rose Bowl concert. I was with my sister, mom and grandma. I’m a big fan,” Jared said. “Every once in a while, you gotta put on some Katy Perry or Taylor Swift.”

5. He supposedly has a girlfriend…who also comes from a sports family! When asked if Jared thought he could raise a family in LA someday, he responded with: “I need a girlfriend first….It’s not tough to meet them [in LA]. I mean, you can meet a bunch of girls out here. It’s tough to keep them.” Well, it’s possible that Jared has landed a love, as rumors claim he’s dating professional model Christen Harper, according to Just Jared.

Not many are reporting on this alleged romance, so take it with a grain of salt until she makes it Instagram official (after all, the swimsuit model has 198k followers.) It would make some sense that these two found each other, as Christen’s brother, Shane Harper is a hockey player who spent time with the Florida Panthers (and is currently playing in the Kontinental Hockey League for Lada Togliatti.) Sports really do bring people together!