Do Kim and Kourtney Kardashian share a closet? The sisters stepped out in near identical outfits, when they both wore high-waisted black leggings and matching bomber jackets! But, which sis wore the look better?

We’re not sure if they’re aware, but Kourtney, 39, and Kim Kardashian, 38, stepped out in near identical looks! Kourt hit the town in LA on Thursday, January 31, in high-waisted black leggings and a cropped, black bomber jacket. After doing some photo research, we knew we had seen that look before. And, it turns out we were right. — Kim actually rocked the same outfit last year!

Kim, who stepped out in LA last December, wore her all-black ensemble first. Sorry, Kourt. She hit the CA pavement in shiny black leggings, while Kourt’s leggings appeared to have a softer material. But, it was how the sisters styled the jacket that showed off their unique taste in athleisure. Kim decided to step out with her jacket, zipped down to show her cleavage. She also tucked the jacket into her leggings. Meanwhile, Kourt popped her collar and kept her jacket zipped up above her breasts. And, since she didn’t tuck her jacket like Kim — Kourt was able to show off her toned tummy.

While Kourt opted for the same style pant and jacket as Kim, she made the workout look her own in a few different ways. She was able to set herself apart from Kim’s look by switching up her hair and footwear. Kourt wore all black Nike sneakers, as opposed to Kim, who paired her leggings with bright silver, pointed heels. Kourt also rocked a low bun, while Kim styled her long, brunette locks down and wavy. 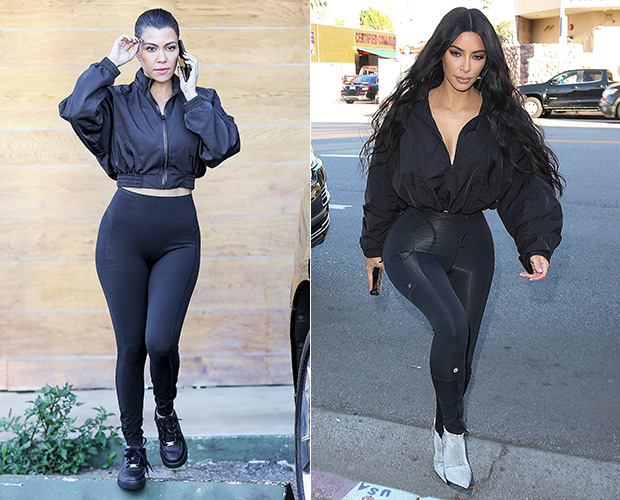 (Left) Kourtney Kardashian in high-waisted black leggings and a bomber jacket in LA on Thursday, January 31, 2019. (Right) Kim Kardashian dressed in a near identical look in Sherman Oaks, CA on December 18, 2018. (Photo credit for both: Backgrid)

Now that we’ve dissected the two similar looks, it’s time to vote on your favorite. So, who wore the all-black athleisure look better? — Kim or Kourtney? Let us know what you think in the comments!