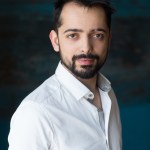 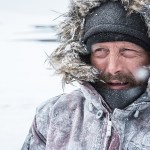 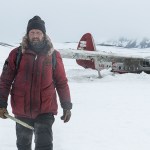 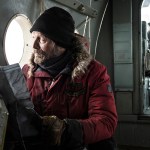 Would you risk your life in the most harrowing of circumstances to save a stranger? That’s the question at the heart of Arctic, a new film that asserts that the human spirit will just barely survive, not live, if it has no other person to care for.

When the new adventure drama film, Arctic, opens we meet Overgard, who against all odds has survived a plane crash in a remote area of the Arctic, and who has ingeniously kept himself alive on a diet of fresh fish, melted ice and hope for rescue. He lives in the shell of his airplane — presumably he was a bush pilot or co-pilot, he has rigged up fishing holes in the ice and has laboriously constructed a massive SOS sign dug into the snow.

His watch is set on a timer to remind himself to set up some kind of radio everyday to send out SOS signals, which so far have not apparently, been heard. He is surviving in this beautiful, but dangerously bleak, silent world. We don’t know how long he has been there, but it has probably been many weeks or even months — he looks skinny and hardened and there’s no way that if he crashed in the fall or winter, that there would be a hope of hiking out for miles, without protection, from the freezing temperatures, wind and snow.

But then, Overgard’s solitude is shattered when a helicopter, most likely not actually on a mission to find him, crashes nearby, killing the pilot and seriously injuring a young woman, who was his passenger. It’s this young woman, who Overgard doesn’t know at all, who is barely ever conscious and who doesn’t speak English, who transforms his life, giving it new found purpose. And this is where that fundamental question in Arctic arises: what is the difference between just surviving and truly living. “Who are you really if you don’t have other people around you, and other people to contextualize your existence as a human being,” Arctic director Joe Penna, tells HollywoodLife in an EXCLUSIVE interview. “When we first meet Overgard, played by Mads Mikkelsen, he’s just a drone, a husk, a shell of a person and he’s going through the motions, and his watch is beeping, and it’s keeping him going, but there’s nothing behind his eyes anymore. He only gains his humanity, later in the film.”

In fact, it’s only by trying to save the life of an injured stranger, that Overgard, comes back to life after merely existing. The young, gravely wounded injured woman, who he discovers has a baby and husband or boyfriend, “Is not the same gender as him, not the same race, doesn’t speak the same language and doesn’t work for the same company, and yet he does so much for her,” explains Penna. “The way that Mads saw it, (his character) must have had someone in his life that this young woman represented, maybe a daughter, or maybe a wife or son.”

And so, Overgard makes the astounding decision to leave the relative safety of his plane and fishing hole, to embark on a dangerous, possibly suicidal mission, to try to pull the young woman on a sled for miles over the snow to reach a manned outpost on his map. He knows it will be almost impossible to do — he’s already attempted the trek once before on his own, and only made it a third of the way there before giving up and going back.

But he knows the woman will die if he can’t get her help. And alone in that hostile environment he seems to have decided that he doesn’t want to go on just surviving. He too would rather die than just exist totally alone and without human contact and without, selflessly giving love. His determination to save her only grows as his journey gets more extreme and more seemingly hopeless.

So why did Penna, who is a Brazilian native, who gained first fame with a successful YouTube channel — MysteryGuitarMan — decide to write with Ryan Morrison, and direct a film about survival in the Arctic? “I wanted to tell a very universal story, something that anybody can understand without a lot of dialogue,” says Penna. He initially conceived of the idea of a film about an inhabited colony on Mars, and a pilot who is part of the community crashes far away from the outpost. Unfortunately, after he wrote the script, his agent told him that there was this new trailer that had just been released for a film called, The Martian, starring Matt Damon.

He and Morrison went back to the drawing board and decided on the Arctic because it was the most hostile but ‘survivable place on earth.’ Penna tells HollywoodLife that he consulted ‘Arctic Survivalists’ — yes, there are such people who live in the Arctic during the winter months and then when it gets too warm for them, they fly to the Antarctic for the other half of the year.

“I wanted (Overgard) to feel real… I didn’t want him to do anything that was out of the realm of possibility.” The Arctic survivalists also reassured him that a plane crash victim with some skills (and I’m assuming with the minimal shelter and equipment that Overgard had) could survive for a year. Now, the survivalists probably had no idea of how to shoot a movie, but the challenges of filming Arctic, were almost as daunting as Overgard’s. Penna settled on Iceland as his location because of the country’s tax incentives for filming AND there are roads into Arctic areas, unlike Canada, where he would have to fly into his locations.

Nevertheless, the 19 day shoot, was daunting. It was freezing. “I had a battery heated clothing on the entire time, and I was still too cold,” he recalls. Heated trailers had to be kept a mile or two away because the sound carried so much. A sunny day turned into a white-out blizzard suddenly and two members of the crew got separated from the group and couldn’t be found for an hour. Plus, the filming had to be perfectly timed between the ending of the dark days in the winter and melting snows and greenery of spring. Then, there was the polar bear who terrifies Overgard in a near death attack. Penna had to find a trained polar bear and he discovered one on YouTube. There was a trainer who found an unwanted polar bear cub at a Russian zoo, raised her and taught her to ‘smile’, he recounts. When she smiles, it looks like a roar. Penna was just three feet away from her when they shot, separated only by an ‘electric’ fence.

He reveals with admiration that she ‘hit her marks.’ So does Arctic!

To see Arctic, which opens today, February 1st, go to https://bleeckerstreetmedia.com/editorial/arctic-movie-theater-showtimes for information on screenings.