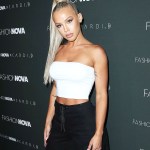 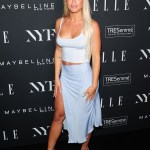 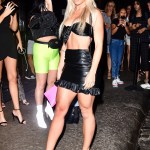 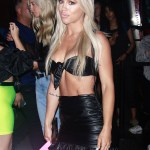 Months after she was hospitalized for passing out at Kylie Jenner’s 21st birthday party, Tammy Hembrow is now rumored to be dating Kylie’s ex Tyga! Find out 5 facts about her here!

Fitness model Tammy Hembrow has been reportedly hooking up with Kylie Jenner‘s ex Tyga. Here’s everything you need to know about the model.

1. She’s been romantically linked to Tyga during his tour of Australia. An insider told Daily Mail Australia that they not only hooked up, but Tammy is apparently “following” Tyga and that they are “100 percent” together. “They travelled up to Brisbane separately and hooked up again later on,” the insider revealed. “She’s basically doing his whole Australian tour with him.”

2. She has two children from a previous marriage. Previously engaged to fitness trainer Reece Hawkins, the two share children — a son, Wolf, and a daughter, Saskia.

3. The KarJenners reportedly unfollowed Tammy after she had to be hospitalized after Kylie Jenner’s birthday party. The model passed out during the reality star’s big 21st birthday celebrations. As a result, Kim Kardashian, 37, Kris Jenner, 62, Kendall Jenner, 22, and Kourtney Kardashian, 39, all hit the unfollow button.

4. She seems to be on good terms with Khloe Kardashian still. On Jan. 24, Tammy assisted in casting the models for Khloe’s Good American brand’s global campaign, according to the Daily Mail.

5. She recently gushed about motherhood to Women Fitness magazine. She told the publication, “It’s really hard to describe unless you’ve experienced it but my life completely changed [for the better]. It is amazing and overwhelming to feel their dependence and trust in me.” We’ll keep you posted with all of the latest news about Tammy, and her budding romance with Tyga. In the meantime, check out all of her most recent photos in our gallery above.