Dua Lipa has great legs and a perky derriere and put both on display in a sheer black laser-cut skirt. We’ve got her stunning outfit from the London ‘Alita’ premiere red carpet.

Holy moly! Dua Lipa made some new rules when it came to fashion at the London premiere of Alita: Battle Angel on Jan. 31 by wearing a gorgeous gown with a super see-through skirt. The 23-year-old singer looked even sexier going than coming, as her dress featured a black sheer laser cut full length skirt. Underneath she wore black sequined low-rise briefs so that her killer legs were on display. It made for a dramatic red-carpet posing session with the futuristic outfit, but as soon as she turned and headed down the red carpet her perky booty was in full view.

The entire gown just oozed sex appeal. The top featured an off the shoulder tightly fitted bodice with black and white horizontal stripes that went down to her mid section. It also gave her breasts to have a bit of a push-up effect while her super slim waist was showcased. From there down the stripes turned vertical for several inches until reaching the line of her sexy briefs. The skirt was so dramatic it had an almost birdcage-like look.

After going blonde for a while, Dua’s back to being a brunette. She wore her hair in a straight above the shoulder bob with a side part and had an extra heavy dark eyebrow to match. With her smokey eyes and dark red lip combined with the incredible gown, the singer outshined most of the actual movie stars on the red carpet! And when it included the likes of beauties Jennifer Connolly and Eiza Gonzalez, that’s a big feat. 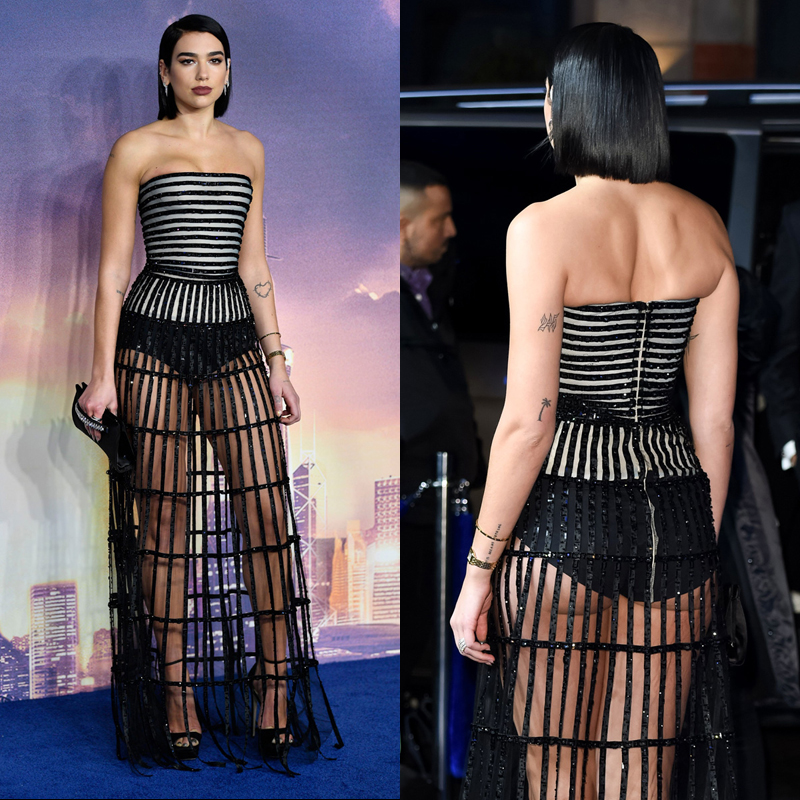 If this is how the “New Rules” singer slays it at the premiere of a movie she’s not even in, we can’t wait to see what she wears to the 2019 Grammy Awards on Feb. 10 where she’s up for Best New Artist. Dua’s going up against Chloe x Halle, Luke Combs, Greta Van Fleet, H.E.R., Margo Prince and Bebe Rexha. With the massive success of “New Rules” as well as “IDGAF,”  her Calvin Harris collab “One Kiss” and vocals on the Silk City hit “Electricity” Dua could really be a frontrunner for her first Grammy win.