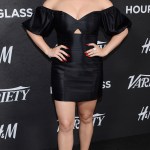 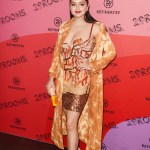 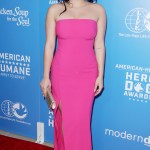 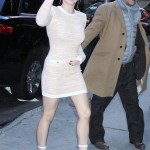 FYI, Ariel Winter has zero time for body shamers. That goes for fans and trolls alike, as one Instagram follower has just learned.

Ariel Winter, 21, has slammed an Instagram user for accusing her of “chopping up her body” to “change” her appearance. The Modern Family star shared some pictures of her best friend actor Joe Kaprielian’s 21st birthday celebrations. They included photos of her posing with Joe and her boyfriend Levi Meaden at the Jan. 26 party. Wearing a black and white checkered jumpsuit, the former child star looked noticeably slimmer than she did a year earlier. That prompted one fan to call her out in her comments section.

“Nothing wrong with being honest and telling her we liked her better before ‘the change’ she was so beautiful before she started chopping up her body,” the person wrote, “and if me saying so helps one gurl out there to feel beautiful who’s thinking of PS [plastic surgery] then its [sic] worth it.”

Ariel refused to take the criticism lying down. She quickly responded to her fan directly, writing, “I appreciate you wanting to help girls love themselves the way the [sic] are, but you are also kind of cutting someone (me) down which isn’t what I think you were trying to do? I also didn’t get plastic surgery. That is also not being supportive of women if you’re just assuming something about the way they look.”

As Ariel’s fans know she’s not shy when it comes to slamming her body shamers. After she posted a photo of her toasting the New Year with her boyfriend Levi, while they both clutched a wine glass, one fan accused her of “drinking underage” in a Jan. 1 comment. Yet another person responded by writing, “Not half as bad as all the coke/meth she uses. She literally dropped 30 ponds [sic].” Ariel jumped on to comment too, by clarifying how she lost the weight. “My psychiatrist switched me from my previous antidepressant that didn’t work and made me gain weight, to coke/meth!!” she wrote. “Definitely not a new one that worked and then regulated my metabolism.”

Note to Ariel’s Instagram fans, followers and trolls: Don’t come for her because she will definitely respond by clapping back at you.