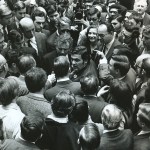 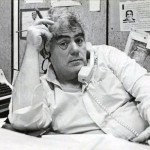 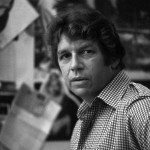 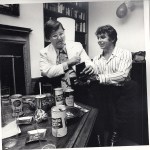 Have you ever bought a newspaper just to read a columnist that you can’t miss? For five decades, New Yorkers did. They flocked to read masterful writers, Jimmy Breslin and Pete Hamill. Now a new HBO doc explores their careers.

When I first moved to New York City in the early 1980s, the city was still addicted to it’s lively opinionated local tabloids, the New York Post and the New York Daily News, with their blaring front page headlines and their opinionated news coverage. I soon learned that the two biggest voices in these papers and a giant draw for readers, were locally born and bred columnists Jimmy Breslin, and Pete Hamill — who at one point became Editor-in-Chief of the New York Post.

Breslin and Hamill may have had large magnetic personalities but they came from bare bones Irish backgrounds. Nevertheless, they grew up to have huge salaries and sway. Now, their lives and influence are documented in a riveting new film, Breslin and Hamill: Deadline Artists, which premieres on HBO, tonight, January 28th at 8pm.

Honestly, the film almost made me cry with regret over the loss of the electric energy of big city newspaper newsroom culture. Watching the footage of the old packed New York City newsrooms, filled with reporters, writers, copy editors, copy boys and typewriters clacking on deadline, was agonizing. Those days are gone — newspapers are in massive retreat — with just the very top publications successfully transitioning into popular digital sites with paid subscriptions. Yet it was less than 20 years ago that most people still rushed to buy their papers in the morning and it was the primary way they ingested their news.

Jimmy Breslin and Pete Hamill rose to fame in the 1960’s, the golden age of newspapers, and the columns they wrote about the Vietnam War, the assassinations of John F Kennedy, Robert Kennedy and Martin Luther King, Jr., about the “Son of Sam’ killings, the Central Park Jogger attack, the AIDS crisis and the 9/11 terrorist attacks, were powerful and eloquent and influenced the opinions of millions of New Yorkers.

Fittingly, Breslin and Hamill, is directed and produced by journalists Steve McCarthy, Jonathan Alter along with filmmaker John Block. McCarthy, a Brooklyn-born Emmy Award winning TV and film producer who worked at Dateline, 60 Minutes and MSNBC, told HollywoodLife in an Exclusive interview why he was fascinated by Breslin and Hamill. “I grew up in Brooklyn, I grew up in a working class house. We got the Daily News (newspaper) everyday but Pete and Jimmy were not exactly popular in my house because my dad was a cop and Jimmy was very tough on the NYPD (New York City Police Department). But I read them as a kid… so I knew their work,” he said “We wanted to do a film about the type of journalism at that time, and what effect these guys had on people and what we lost… we miss these guys.”

McCarthy recounts how he’d see Jimmy Breslin’s name on the side of buses, and when big news events happened, “We would buy the Post to see what Pete was saying about the Vietnam War or whatever. We knew who these guys were. We knew what they were about. They went out and reported and they gave us opinion based on the facts.”

Neither Breslin nor Hamill ever went to college or journalism school but they were both brilliant, colorful writers and they knew their New York City neighborhoods and readers intimately. They hung out in the local bars and neighborhood restaurants. They also came to know the rich and glamorous. Peter Hamill dated Jackie Kennedy, lived with actress Shirley MacLaine and befriended Robert Kennedy. In fact, both he and Breslin were with RFK, on the night he was assassinated.

Nevertheless, they both provided a voice for NYC’s working class but were deeply empathetic to minorities, and to AIDS victims, at a time when people were terrified of the ‘gay plague’ and shunned its victims. They had huge personas but they also had heart. However, another big NYC personality at the time that they they covered was, you guessed it — Donald J. Trump — who did not, and they deplored his vicious attacks on five teenage boys from Harlem, who were arrested for the rape and near death beating of a Wall St. banker who was jogging in Central Park. Trump took out a full page newspaper ad calling for the execution of the ‘Central Park 5’. Even after the 5 were exonerated and released from prison years later when another man whose DNA matched was found on the jogger, confessed, Trump wanted them executed.

Hmmm. Remind you of his Obama birth certificate behavior.

Hamill eviscerated Trump in a column decrying his ‘virtue of stupidity.’ “Hate was just another luxury and Trump sitting naked reveals that he’s the spokesman for the tiny minority of Americans who lead well defended lives. Forget poverty and its causes. Forget degradation and squalor of millions. Fry them into passivity.” McCarthy points out that Hamill wrote something equally prescient about the politics of today, in 1969.  Check this out: “They call my people the white lower middle class these days. it’s an ugly cold phrase. All over New York tonight… men are standing around saloons talking darkly about their grievances and even more darkly about possible remedies. Any politician that leaves that white man out of the political equation does so at a very large risk and that could be the end of us.”

“That’s Trump’s voters,” points out McCarthy. And he believes that great journalism about them and about the Trump administration is being done at The Washington Post and New York Times. But it still needs to be done in small communities too.

What we’ve lost and what we need, he says are journalists who haven’t gone to elite universities, but instead come from the towns and neighborhoods that they will cover, like Breslin and Hamill did. “Someone from Harvard is not going to walk into a bar in Bay Ridge, NY and strike up a conversation with somebody… like these guys did. They were embedded there.

Jimmy Breslin passed away in 2017 but Hamill is alive and is writing a book, according to McCarthy, “His mind is very sharp and he understands the power of the internet.”

I can’t wait to read his book. Now tune into Breslin and Hamill: Deadline Artists on HBO if you want to see brilliant journalism in action.