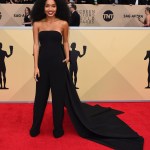 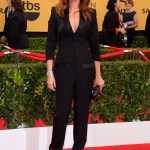 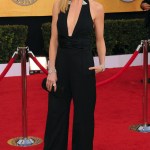 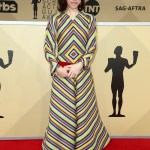 When you think of red carpet fashion, you probably picture gorgeous gowns – but these celebs switched it up by wearing jumpsuits to the SAG Awards! See the pics!

It’s almost time for the 25th Annual Screen Actors Guild Awards! The show kicks off tonight, Jan. 27, but before celebs walk the red carpet, we decided to look back at some nontraditional looks from years past. Now, we know we can expect to see plenty of glamorous gowns on the carpet this evening, but there’s a different trend that we’re hoping someone takes on – jumpsuits! Not only are jumpsuits super trendy, but they’re unexpected while still being a one-piece look!

Of course, if someone does wear a jumpsuit to the 2019 SAG Awards, it wouldn’t be the first time. A handful of stars have sported the all-in-one ensemble on the red carpet before. Just last year, Yara Shahidi showed off her fashion chops by showing up in a stunning Ralph Lauren jumpsuit with a train. The strapless piece was fitted and minimalist, but the added aspect of being pants as opposed to a skirt made this simple look feel fresh and cool. The grown-ish star accessorized with funky drop earrings and added a pop of color with a dark red lipstick.

Jumpsuits have been making appearances on the SAG red carpet for years now, though! In 2015, Julia Roberts wore a suit-inspired jumpsuit by Givenchy for the show. Julie Bowen also wore a black jumpsuit – this one featuring a plunging neckline and designed by Catherine Malandrino – when she attended the SAGs in 2011.

Red carpet jumpsuits don’t have to be black, though. Sally Hawkins opted for a colorful one by Dior for the 2018 show where she was nominated for her role in The Shape Of Water. Head up to the gallery above to see more great jumpsuit looks from previous SAG Awards red carpets!