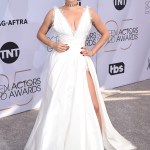 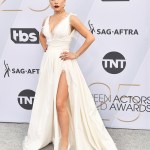 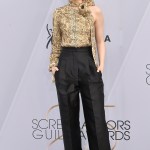 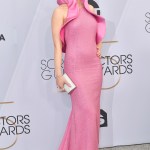 Emily Blunt always looks amazing – but her dress for the 2019 SAG Awards was on a whole other level! The actress stunned in a sequined bubblegum pink gown by Michael Kors.

Emily Blunt is consistently a delight on red carpets, so it’s no surprise that she arrived at the 25th Annual Screen Actors Guild Awards looking absolutely gorgeous! The actress, 35, was dressed to the nines in a peony Michael Kors gown and Forevermark Diamonds. The custom dress was a fitted crystal-embroidered number and featured a fun design element in the form of ruffle sleeves. Emily accessorized with a simple white clutch.

Emily’s beauty look was just as on-point as her gown. Her cheekbones were popping, thanks to some expertly applied bronzer and her lips were the same soft pink hue as her ensemble. Emily pulled her blonde locks back into a sleek bun. Only she can make ultimate glamour look so effortless!

Of course, Emily didn’t come alone! She and husband John Krasinski walked the carpet together, looking SO in love (as per usual). John looked dapper in a custon dark green suit with black accents by Isaia. He pulled his look together with a classic bowtie. Before the show, the couple took a selfie together, which John tweeted out with an adorable caption about his wife. “Honored to be on the arm of this double nominee tonight! #SAGawards,” he wrote.

Tonight’s show could be a big one for Emily. She’s nominated for both Outstanding Performance by a Female Actor in a Leading Role and Female Actor in a Supporting Role (the former for Mary Poppins Returns and the latter for A Quiet Place). John also received a nod for Male Actor in a Drama Series thanks to his performance in Tom Clancy’s Jake Ryan, so really it’s a huge night for the whole family!

Emily isn’t the only celebrity who stunned on the red carpet! Get clicking through the gallery above to see which other stars graced the SAG Awards red carpet with their presence! The 2019 SAG Awards air live at 8 p.m. ET on both TBS and TNT on Sunday, Jan. 27.