Does Kourtney Kardashian have a brand new beau? After a flirtation with model Luka Sabbat, 21,  she was spotted out having dinner in Malibu with a hunky new hottie. We’ve got the pic.

Kourtney Kardashian recently confessed that she wants to be “in love again” and now she’s been spotted out with a brand new man. Despite the 39-year-old’s flirtation with 21-year-old model Luka Sabbat, she was photographed leaving Malibu hot spot Nobu on Jan. 23 with a handsome hunk. The brunette hottie was all smiles — as was Kourt — as they left the sushi restaurant and he’s been tentatively identified as David Duron. He has close ties to the Kardashians as his brother, Dakota is the brother-in-law of Rich Wilkerson Jr., the pastor who officiated her sister Kim, 38, and Kanye West’s wedding back in 2014.

Kourt glammed up for their night out in a pair of skin-tight black latex pants and high-heeled boots. She wore a copper-colored windbreaker on top for the chilly Malibu ocean side evening and had her hair pulled back in a tight bun. There was no mistaking how happy she was to be out with David, as she was smiling from ear to ear in all of the photos of them together.

David is quite religious. He frequently attends Miami-based VOUS Church, where Rich and his wife DawnCheré are the lead pastors. Kourtney is also deeply faithful so maybe the smiles on their faces came from bonding over Jesus’ love over dinner. 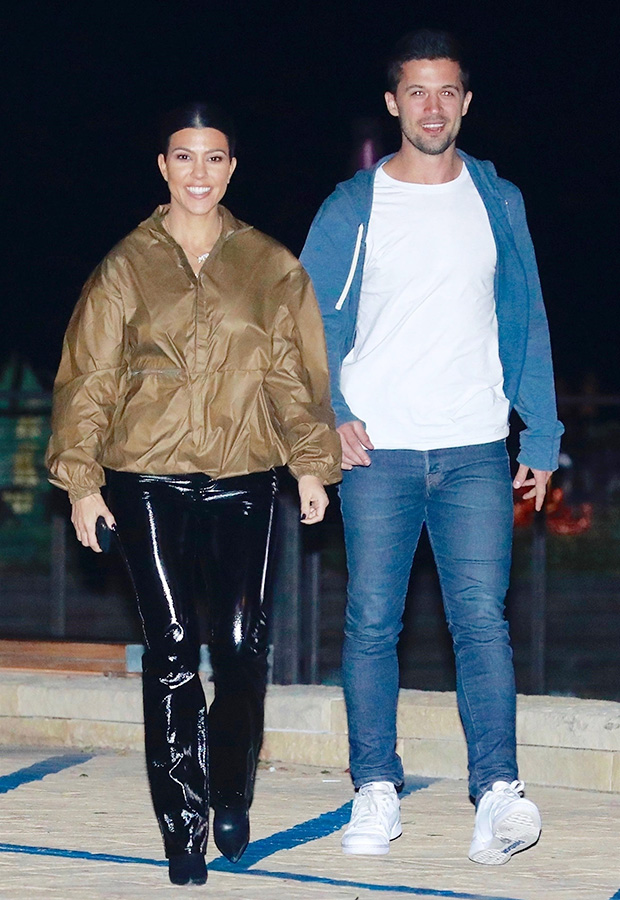 Kourtney recently revealed that the’s looking to find love after being moved by watching the 1999 Julia Roberts/Hugh Grant rom-com Notting Hill. She posted a screengrab from the film to her Instagram stories and wrote on it “I want to be in love.” The mom of three broke things off with boyfriend of 15 months Younes Bendjima, 26, in August of 2018 and has been single ever since. She’s been spotted out shopping and going to dinners with Luka, but it’s been reported that they’re more pals than lovers. We know that perfect man is out there for Kourt.