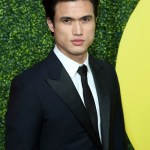 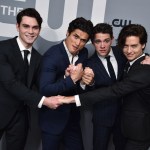 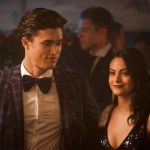 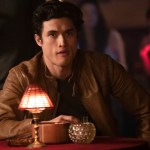 On-screen, Reggie has to fend off Mr. Lodge’s Gargoyle gang. IRL, Charles Melton has to deal with Mark Consuelos’ trolling. Is there much a difference?

Charles Melton, 28, has to put up with Mark Consuelos’ tomfoolery on and off-screen! Taking cues from his evil character on the CW show, Mark poked fun at Charles’ magazine cover for Dazed, which he shared to Instagram on Jan. 23. Mark inquired under the sexy portrait, “Your bottom lip is very plump..Kylie Jenner Lip-kit?” The older actor isn’t wrong, as over 4,000 people “liked” his comment. Charles’ pout is very plump, but hey, no one’s complaining. See the hilarious comment below!

In more serious news than Kylie Lip Kits, major drama just went down in the Jan. 23 episode of Riverdale, dubbed Chapter Forty-Five: The Stranger. With Archie’s return to the town of Riverdale, we were confronted with the awkward love triangle between him, Veronica and Reggie (Charles’ character). And then there was THAT shocking gun shot — get the episode’s full recap here!

When the CW cast isn’t busy solving mysteries and having steamy hookups (on-screen, of course), they sure love to shade one another on social media. Who could forget when Cole Sprouse, 26, nabbed the prestigious “Choice Male Hottie” honor at the 2018 Teen Choice Awards, and co-stars KJ Apa and Charles (more male hotties) put in their two cents. “I should have won that f***ing award,” KJ wrote under a picture of him and Cole at the award show. Charles added, “I still cant believe it. How many… how did HE win teen choice male hottie!?” Meanwhile, Cole was just proud he beat out Chris Hemsworth, male hottie supreme.

I had eggs for breakfast

You can check out even more photos of Charles’ “plump” lips in HollywoodLife’s gallery of the actor above! To answer Mark’s question, the secret to his luscious lips may be eggs, not Kylie’s matte lipsticks.