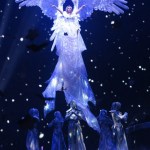 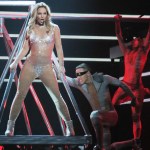 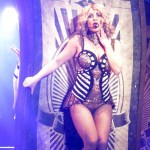 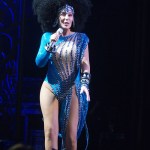 Hello sequins, angel wings, and sheer bodysuits! We rounded up the most out-there costumes our Las Vegas residency queens have graced the stage in.

There are concert costumes, and then there are Las Vegas residency costumes! There’s something about having reign over a stage for months on end that opens new possibilities in a pop star’s wardrobe. We’re seeing that happen right now with Lady Gaga’s Enigma residency, which kicked off at the Park MGM on Dec. 28, 2018 and will have its last show on Nov. 9, 2019. With just a few show weeks under her belt, Gaga has already wowed audiences with cyberpunk pieces that belong in the MCU universe: one bodysuit coursing with electricity, and another that looks like it’s lined with the pieces of a shattered disco ball (below)! The costumes are so out of this world, not even the “monsters” that appear on stage can distract from Gaga.

And then there’s the queen of Las Vegas, Britney Spears. Sure, the 37-year-old pop star broke our hearts when she cancelled her Domination show, originally set to kick off on Feb. 2019, following her dad’s hospitalization. But at least the entire wardrobe from her last residency, Britney: Piece Of Me, was unforgettable. It had to be, since Britney put on a whopping 248 shows for four years! On the opening night of the show, Britney ascended the stage in an ethereal white dress that was so long, it almost touched the ground — even though she was suspended high above the stage! A giant pair of angel wings extended behind her, making us hope this is what we see at the gates of Heaven. Of course, that was just one outfit. Relive many more in our gallery above!

Another residency veteran is Jennifer Lopez, 49, who just capped off her nearly three-year show, All I Have, on Sept. 29, 2018. The show raked in over $60 million in ticket revenue, but was just as much a success in the costume department. As one of many examples, JLo dazzled us with diamond lingerie and a dramatic trail of plumage!

Of course, we haven’t forgotten the royals — Cher, 72, and Celine Dion, 50! The masters of ballads are renown for their Las Vegas residencies, both for the classic songs performed and innovative outfits. Our personal favorite is Cher rocking a sparkly blue wig — again, see the wild look in our gallery above!