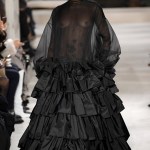 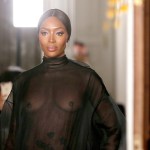 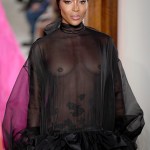 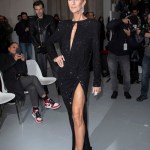 We’re in the thick of Paris Fashion Week and so many stars have been rocking sexy sheer dresses, plunging blazers and couture looks. See the best fashion of the week so far!

Madison Beer went to the Ralph & Russo show on Jan. 21, wearing a hot pink suit, with no shirt under her blazer. Sexy! The braless blazer look is totally trendy among celebs and she looked amazing. Her hair was pulled back, showing off her hoop earrings and bold brows. Coco Rocha was also at the Ralph & Russo show, wearing a belted white halter gown. Coco was also gorgeous at the Iris van Herpen Haute Couture Fashion Week show on Jan. 21.

Karlie Kloss STUNNED in a sheer Dior midi dress during the Christian Dior show, where she sat front row next to a bunch of famous faces. Also at the Dior show, Rachel Brosnahan in the front row, wearing black. Kat Graham wore an embroidered turtleneck dress with sheer skirt, while Felicity Jones wore an oversized suit.

At the Chanel show in Paris on Jan. 22, Kristen Stewart sat front row, with dark and dramatic makeup, watching models like Kaia Gerber slay the runway. Kristen wore a tweed blazer with metallic gold accents and shimmering gold pants. She posed for a photo with Pharrell Williams before the show started.