Police confirmed on Jan. 22 that Chris Brown and two other people have been detained in Paris after a woman filed a rape complaint. Here’s the latest.

UPDATE #2: According to Chris’ Parisian lawyer, Raphael Chiche, he plans on suing the alleged rape victim for defamation, TMZ reports. “Chris Brown is free. No lawsuits were filed against him. He vigorously challenges the charges against him. A complaint for slanderous denunciation will be filed tomorrow with the public prosecutor of Paris,” he said.

UPDATE #1: Chris Brown has been released from custody. He was not charged after a woman accused the singer of raping her in a hotel room in Paris, according to his lawyer and French police. He’s now free to leave Paris, and took to his Instagram to refute the rape allegation in a post that reads, ‘The B*tch Is Lyin’.”

Chris Brown has been accused of rape by a woman in Paris, and police have detained him while they investigate the situation, the Associated Press confirmed on Jan. 22. The singer and two other people are being held in Paris, with Chris facing possible charges of aggravated rape and drug infractions, a judicial official explained to the outlet. Those investigating the case will have two days to decide if they will let Chris go, or if they have enough evidence to charge him. One of the other people also being detained is a bodyguard for Chris.

The identity woman making these accusations against Chris has not been confirmed, but she said she met Chris and his friends at the Paris Club, Le Crystal, on Jan. 16. After the evening out, she said they went back to the Mandarin Oriental Hotel in central Paris, officials said. Chris was officially detained on Jan. 21, and as of the morning of Jan. 22, he is still being held as the investigation continues.  HollywoodLife has reached out to a representative for Chris for comment on this story.

Chris has a long history of legal troubles, including, of course, his 2009 assault of Rihanna ahead of that year’s Grammy Awards. He completed probation in 2015, but less than one year later, he was arrested at his L.A. home after a woman, Baylee Curran, called police and accused Chris of threatening her with a gun. He was released after posting a $250,000 bail. Chris was then arrested once again in July 2018 for an outstanding felony battery warrant, but was eventually released on $2,000 bond. 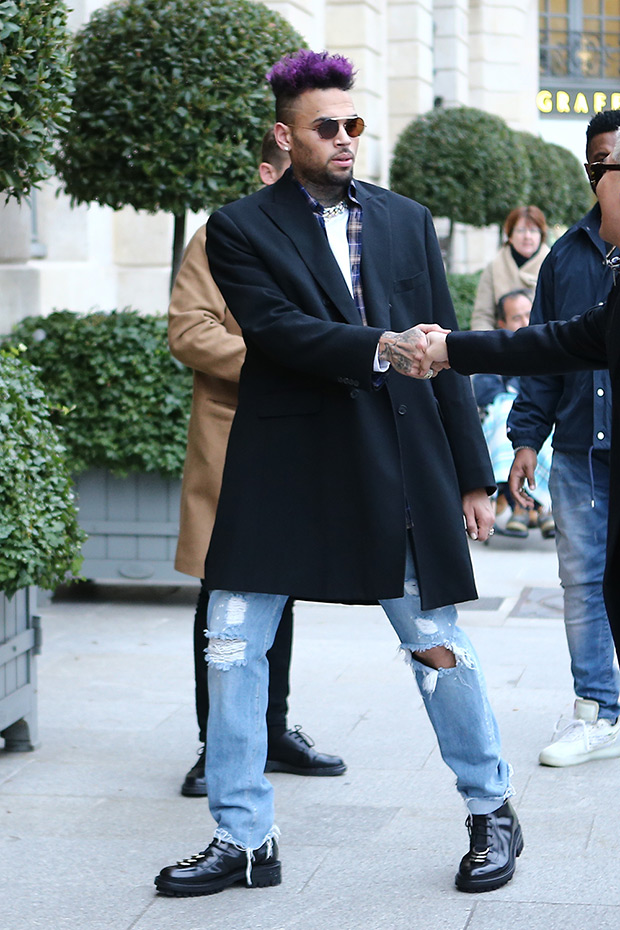 The singer has been spending time in Paris for Paris Fashion Week, and was spotted packing on the PDA with his rumored on-again girlfriend, Ammika Harris, during the trip.