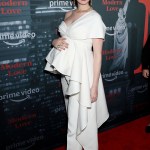 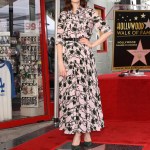 Anne Hathaway is making a big sacrifice for her 2-year-old son. The ‘Ocean’s 8’ star is not only giving booze the boot, she’s giving up alcohol until her toddler leaves the nest!

Anne Hathaway, 36, is staying sober for the next decade and more! Drinking is just not the same when you’re a new mom, which the Interstellar actress came to discover after welcoming her now 2-year-old son, Jonathan Rosebanks Shulman, with husband Adam Shulman in 2016. “I quit drinking back in October, for 18 years,” Anne announced during her Jan. 21 appearance on The Ellen DeGeneres Show. But Anne confessed that a sense of motherly duty alone didn’t spur her decision.

“I’m going to stop drinking while my son is in my house just because I don’t totally love the way I do it,” Anne admitted to host Ellen DeGeneres, adding, “And he’s getting to an age where he really does need me all the time in the morning.” She then reflected on a particularly unpleasant memory of trying to juggle drinking and mom duties: “I did one school run one day where I dropped him off at school, I wasn’t driving, but I was hungover and that was enough for me. I didn’t love that one.”

It’s no surprise that Anne went cold turkey, considering how much she believes becoming a parent has changed her. “I feel such a deep physical connection with my son,” she told the Las Vegas Review-Journal in an interview published Jan. 19, just two days before her Ellen appearance. “When he’s sick, I wake up in the middle of the night asking, ‘Why does my throat hurt?’ If I have a headache, he will rub his little head. We are connected in ways that no one could ever explore in a lab. It’s just part of the magic of life.”

Anne won’t be going on any more rum tours on the island of Mauritius with Serenity co-star Matthew McConaughey, which she also hilariously reflected on in the interview above! Speaking of the Texan dreamboat, Anne can do an excellent impersonation of her acting partner — quite frankly, the best we’ve ever seen. You’ve got to watch Anne’s Matthew McConaughey impression, here.