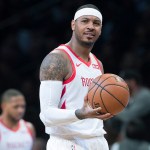 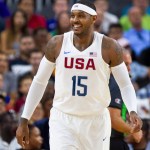 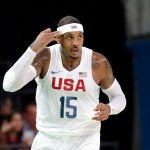 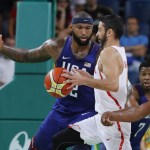 Melo’s on the move! The Rockets traded Carmelo Anthony to the Bulls. But he won’t be playing a single game for Chicago and we’ve got details on how he could end up an L.A. Laker.

Carmelo Anthony, 34, could wind up finally playing NBA hoops alongside pal LeBron James in Los Angeles. ESPN’s ever reliable Senior NBA Insider Adrian Wojnarowski broke the news on Jan. 21 that “The Houston Rockets have agreed to trade Carmelo Anthony and cash to the Chicago Bulls” but that he “will not play a game for the Bulls, but it is possible that franchise holds off on waiving him until the trade deadline. Bulls could include him in a one-for-one trade, but can’t aggregate his contract in another deal.” He added that “For Anthony, his best bet is waiting until the Feb. 7 trade deadline to find his next team. He can wait for roster spots to open, trades to happen, etc, that’ll create the best opportunity for him. Anthony wants to find a place to contribute.”

Melo would love to end up on the LA Lakers roster playing alongside close friend LeBron. Adrian reports that sources in the league tell him, “The Lakers maintain interest in Anthony, but do not want to waive a guaranteed player to create a roster spot for him. If a roster spot eventually opens with LA, yes, the Lakers are a possible destination for Anthony.” We’ve got EXCLUSIVE details on how the City of Angels is Melo’s most hoped for destination.

“They are great friends and LeBron has always wanted to play with Carmelo and LeBron knows that Carmelo could be a great locker room leader and help the team progress since they are so young. And LeBron feels like having a scorer like Carmelo would be amazing for the team to help them reach the playoffs. LeBron is all in on Carmelo joining the Lakers. He would love it,” a source close to Melo, 34, tells HollywoodLife.com EXCLUSIVELY.
“He will not play for the Bulls and this trade was not a surprise for Carmelo at all. His agents have kept him in the loop the entire time. He actually welcomes it because it finally gets him free to join the Lakers. That is his number one destination and the Lakers want him. The only hang up is the way contracts go in the NBA. The Lakers still have to drop someone to make room for him. It’s a process but with that being said it’s the process that needs to be done. It’s still a few weeks away from being official. The shock would be if Carmelo isn’t a Lakers player by March,” our insider adds.