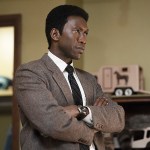 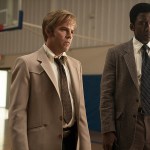 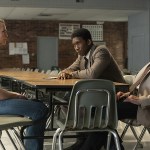 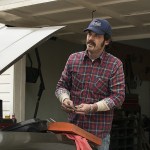 ‘True Detective’ is amping up the mystery. The Purcell case consumes Wayne in three decades, and he’s reminded of something he may be hiding about the investigation during the Jan. 20 episode.

1980: Wayne and Roland realize that the Purcell kids were lying about meeting up to play with their neighbor. They go back through the kids’ things to see if they missed anything. Roland finds a map of sorts, while Wayne finds a bunch of Barbie dolls and a handful of notes that say things like “don’t listen” and “I’ll keep you safe” in a Hoyt Foods bag. The detectives believe that the Purcell kids may have had a secret friend.

Meanwhile, Amelia and Wayne’s bond continues to grow as the investigation intensifies. During yet another search, Wayne finds Will’s dice in the woods and a bag of toys. Nearby, he sees a strand of hair and blood on multiple rocks.

Wayne and Roland interview a resident who lives close by. The man admits that he had seen the kids a couple of times coming down the road and going into the woods. He also tells the detectives that he saw a car around his place a couple of times. A black man and a woman were driving a brown car. After a search warrant, the detectives find more toys on the property.

The investigation continues to cause friction within the community. Brett “Trash Man” Woodard, who was questioned by police, is brutally attacked by residents. They threaten to kill him if they see him talking to another kid around town. A bloody Brett immediately goes home to his shed and carries out a green duffel bag. What is in the duffel bag?!

1990: Roland is now being interviewed about the Purcell case. He’s a lieutenant for the Arkansas State Police. He admits that he tried to get Wayne transferred here, but he got blocked twice. Roland says he doesn’t see Wayne much anymore. “Not at all really. I don’t know why,” he says, before adding that he has no hard feelings towards his former partner.

Wayne is frustrated over the case being brought up again, but he can’t leave it alone. This case changed the course of his life and continues to do so. He didn’t know the case would be his last. Wayne and Amelia go to the Walgreen’s where Julie was arrested. He says that he’s “tired of this thing being in our lives.” Amelia’s not ready to let it go.

She goes to the police to get more information, and she’s able to flirt her way to answers. Meanwhile, Wayne’s at Wal-Mart with the kids. At one point, Becca gets lost in the store. Wayne runs through the store looking for her. He knows that time is of the essence in situations like this. A desperate Wayne is ready to shut down the store when she pops up safe and sound.

Amelia has dinner with the detective and finds out that Julie’s fingerprints were only found on shelves and in the cosmetics aisle. She thinks she can get her hands on private surveillance footage. The case continues to frustrate Wayne, and he takes it out on Amelia.

Roland goes to visit Will and Julie’s dad to check on him. Their mother died two years ago. Tom has been sober 5 years. He asks about Wayne, who hasn’t been a part of major crimes for a long time. He thanks Roland for pulling him “out of that hole 5 years ago” and asks Roland to pray with him.

With the Purcell case being reopened, it was only a matter of time before Roland and Wayne came face-to-face. Roland wants to make Wayne a member of his new task force. “You feel like maybe being a detective again?” Roland asks Wayne. “Because, that, you were okay at.”

2015: Wayne goes to the doctor after his blackout. Nothing has changed in regards to his Alzheimer’s. Wayne threatens to kill himself if his son puts him in a nursing home.

He continues to film the documentary. The reporter brings up that there are people who have never been questioned about the case. That brown sedan the resident saw in 1980 is brought up again. Two weeks before the murder, a man said his son and friend saw a black man with a scar and a suit at the cup de sac where the kids played near Devil’s Den. That was never in the official records. Wayne is caught off guard by this information. But is it new information or information he’s forgotten?

He goes home and records more audio about the case and begins hallucinating Amelia. He is terrified. “You’re worried what they’ll find,” she says. “What you left in the woods. Finish it.” What is Wayne hiding?! What does he need to finish?!