Offset wants his wife back and he’ll stop at nothing to make it happen! HollywoodLife has learned that he can’t get Cardi out of his head, despite walking the runways at Paris Fashion Week! And, he’s super impressed with her 6-pack she’s been flaunting on IG!

Although Offset, 26, is currently in Paris for Fashion Week, he can’t get Cardi B, 26, out of his head. The Migos rapper has never stopped missing her since she announced their split in early December, and he wants her back. And, it’s been harder for Offset to be away from his estranged wife since she started showing off her six pack abs all over social media!

“Offset thinks Cardi is looking sexier than ever. He thinks she looks better than ever in her new videos and pics on Instagram,” a source close to him tells HollywoodLife EXCLUSIVELY. “Offset is impressed with Cardi’s abs and her amazing post-baby body. Seeing her perfect revenge body after their split has him regretting the mistakes he made in their relationship. Right now, he feels like Cardi looks so good that he would do anything to win her back,” the insider explained, noting that her body isn’t the only reason Offset wants her back. “He really, truly misses her and the chemistry they shared. He wants her back in his life for good.”

Offset has been on an apology tour to win back the mother of his child ever since she announced their split at the end of last year. From video apologies, to crashing her concert stages with roses (and a cake!), he’s trying anything at this point. “Offset is pulling out all of the stops to try to win Cardi back. — He’s showering her with lavish gifts on the daily,” a separate source tells us. 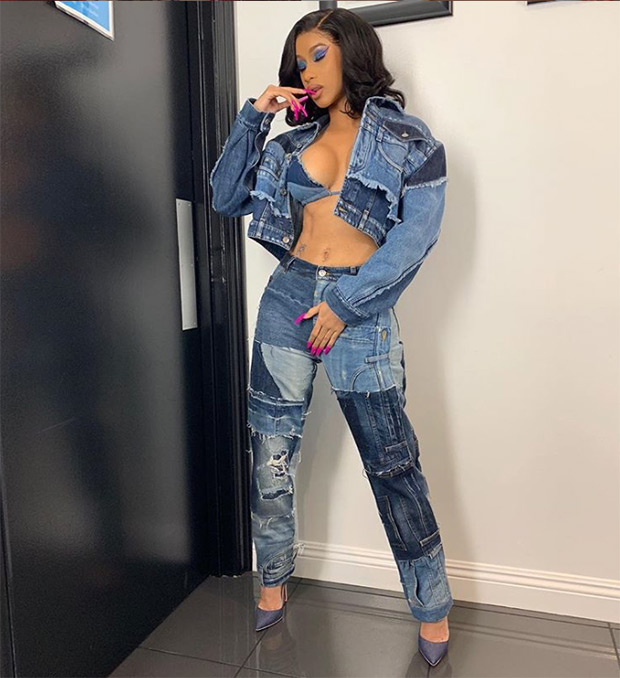 Cardi B shows off an all-denim look by NAMILIA and Dolce & Gabbana pointed stilettos on Instagram, January 16, 2019. (Photo credit: @Iamcardib/Instagram)

“He really regrets what happened with her, and he truly loves her. Offset knows he made a mistake and he will stop at nothing to get Cardi to forgive him. They still talk constantly which makes him feel like he has a solid chance at winning her back. Just the idea of her being with someone else makes him sick — He’d never be able to stomach it.”

Cardi revealed she was no longer with Offset (despite still being legally married), after he was accused of cheating on her. He later revealed that although he did entertain conversations with another female, he did not sleep with her. While the couple continues to co-parent their daughter, Kulture Kiari Cephus (born in July 2018), they’ve been spending time apart until Cardi figures out what she wants to do with the future of their marriage.

Nonetheless, Cardi and Offset gave fans hope that they’d get back together after they were photographed on a jet ski in Puerto Rico just before Christmas. But, when fans asked Cardi if she was back with Offset after their trip, she claimed on Instagram Live that she only reunited with him because she needed to get “f–ked.”