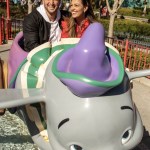 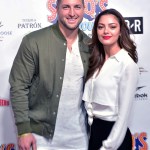 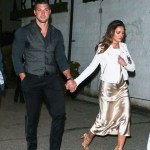 It really was the happiest place on earth for Tim Tebow and Demi-Leigh Nel-Peters. After he popped the question, Demi-Leigh celebrated her engagement with her ‘Prince Charming’ at Disney World!

So, Tim Tebow. You just proposed to Demi-Leigh Nel-Peters, the love of your life, and she said yes. What are you going to do? It seems the only answer to that is “I’m going to Disney World!” Tim, 31, and Demi-Leigh, 23, took their brand new engagement to the beloved theme park for a day of sun and smiles, as the two couldn’t stop grinning from ear to ear. “My Prince Charming,” the Miss Universe winner captioned a picture of them outside of Cinderella’s castle that she uploaded to her Instagram on Jan. 11.

In addition to posing outside the castle, Demi-Leigh and Tim posed along with their Disney counterparts as they took a picture with Cinderella and her Prince Charming. They also had some fun on the rides, most notably taking a spin on the world-famous flying Dumbo ride. This little celebration literally came a day after Tim and Demi-Leigh announced their engagement. “Thank you for saying YES and making me the happiest man in the world,” the former NFL quarterback and current baseball player wrote when sharing pics to his Instagram.

“Any dreams I’ve ever had, you’ve exceeded them all! I love you and I can’t wait to spend forever with you!” Miss Universe 2017 wrote when she shared the pics to her account. Speaking of exceeding things, Tim certainly went all out with the engagement ring. He got down on one knee to propose with a 7.25-carat diamond ring, and Ritani Vice President Josh Marion EXCLUSIVELY told HollywoodLife.com that such an “incredibly rare” diamond would be insured “for at least $600,000 to $700,000.”

If that ring doesn’t drive home the fact that the former Denver Broncos star is serious about marriage, an insider EXCLUSIVELY told HollywoodLife.com that Tim thinks Demi-Leigh is his “soul mate.” He “knew almost right away that she was ‘The One’ “ for him, which is why he proposed so soon after they went public with their relationship. Though they haven’t been together for that long, the insider tells HollywoodLife.com that Tim’s so sure that she’s the right one for him that he’s ready to marry her right away and start the next phase of their lives.