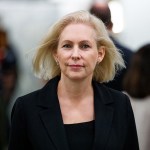 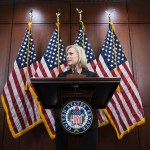 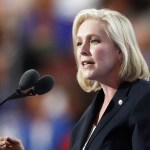 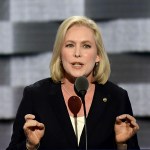 Sen. Kirsten Gillibrand of New York just announced in an interview with Stephen Colbert that she’ll be the 3rd Democratic woman running for president in 2020.

Senator Kirsten Gillibrand, 52, of New York, will join female Democratic candidates, Senator Elizabeth Warren, 69, of Massachusetts, and U.S. Representative Tulsi Gabbard, 37, of Hawaii, and become the third woman to run for president in the upcoming 2020 presidential election. The senator of 10 years made her official announcement during her appearance on The Late Show With Stephen Colbert on Jan. 15 and made it clear that she’s determined to beat President Donald Trump to not only become the first female U.S. president, but to also make the difference she believes the country so desperately needs.

“I’m filing an exploratory committee for President of the United States tonight!” Kirsten replied when asked by Stephen if she had any announcements. She went on to give her reasoning for her historic decision. “As a young mom, I’m going to fight for other people’s kids as hard as I would fight for my own which is why I believe that healthcare should be a right and not a privilege,” she explained. “It’s why I believe we should have better public schools for our kids because it shouldn’t matter what block you grow up on and I believe that anybody who wants to work hard enough should be able to get whatever job training they need to earn their way into the middle class.” Kirsten, who has been married to venture capitalist, Jonathan Gillibrand, for close to 18 years, is the mother of sons Theodore, 15, and Henry, 10.

She continued talking about her reasoning for her presidential run by stating exactly what she thinks needs to be done to get  effective changes made. “But you are never going to accomplish any of these things if you don’t take on the systems of power that make all of that impossible, which is taking on institutional racism,” she said. “It’s taking on the corruption and greed in Washington, taking on the special interests that write legislation in the dead of night, and I know that I have the compassion, the courage and the fearless determination to get that done.”

Shortly after her live television announcement, Kirsten took to Twitter to explain her decision further and to encourage others to support her and change the direction of the country. “Now is our time to raise our voices and get off the sidelines,” one of her tweets read. It didn’t take long for enthusiastic women to tweet messages of excitement and hope in response to Kirsten’s headline-making news.

“Just a few years ago, I interned for @SenGillibrand and to now see her launch her campaign to be president brings me so much joy. She’s a true inspiration and interning for her changed my life and motivated me further for a life in public service,” one supportive tweet read. “Watching @SenGillibrand announce she’s running for president made me feel hope like I haven’t felt since the morning of Nov. 8, 2016. I’m happy to fight. I believe that we will win,” another tweet read. “Can we talk about how potentially amazing it will be if three female senators run and are cordial to and supportive of each other throughout the process?? @SenWarren @SenGillibrand @KamalaHarris #2020election,” a third follower tweeted.

Tonight I announced that I’m preparing to run for president, because I believe we’re all called to make a difference. I believe in right vs. wrong – that wrong wins when we do nothing. Now is our time to raise our voices and get off the sidelines. Join me: https://t.co/I1vp93u0wh

Just a few years ago, I interned for @SenGillibrand and to now see her launch her campaign to be president brings me so much joy. She’s a true inspiration and interning for her changed my life and motivated me further for a life in public service. pic.twitter.com/vw5mw52TXB

Kirsten’s presidential run is super exciting but there may be another U.S. Senator added to the list soon. Senator Kamala Harris, 54, of California may announce a run for the 2020 election on or around Martin Luther King Jr. Day on Jan. 21, according to ABC News. If Sen. Harris does enter the race, she will be the third U.S. Senator in the election and the fourth woman.