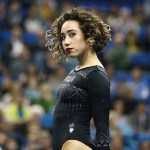 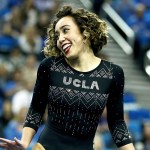 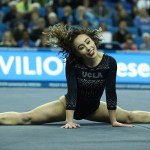 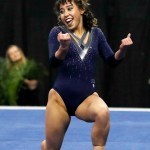 After absolutely nailing her sass-filled floor routine on Jan. 12, UCLA gymnast, Katelyn Ohashi, has become an Internet sensation. Here’s everything to know about her!

Katelyn Ohashi, 21, has officially gone viral! The UCLA gymnast put together an insane floor routine for a meet on Jan. 12, and it has EVERYONE talking. During the 1:30 routine, Katelyn dances around to an unconventional mix of upbeat music, but along with her sassy moves were some EPIC tricks. Katelyn absolutely nailed all of her stunts, and she had a smile on her face the entire time. Here’s more to know about the college gymnast:

1. She’s a former elite gymnast. Katelyn made her national gymnastics debut in 2009 at the Junior Olympic National Championships, and competed in her first elite meet that same year. She was named to the Junior National Team, and she competed with the team for four years, from 2009-2013. In 2013, she began competing at the Senior Level. She has 22 gold medals to her name from events like the U.S. National Championships, U.S. Classic and more.

2. An injury derailed her career in 2013. Shortly after winning the 2013 American Cup at the Senior Level, Katelyn had to have shoulder surgery. This kept her out of competitions for the remainder of 2013. In 2014, as she was working her way back up to an elite level, she suffered a back injury that kept her out of competitions for another year. When she returned to gymnastics in 2015, she dropped down to level 10 from the elite level.

3. She’s beaten Simone Biles! When Katelyn won that 2013 American Cup, she had to beat one of this generation’s most well-known gymnasts, Simone Biles. Not too shabby, huh!?

A 🔟 isn't enough for this floor routine by @katelyn_ohashi. 🔥 pic.twitter.com/pqUzl7AlUA

4. She left the elite gymnastics world for college. Although Katelyn once had dreams of being an Olympian, she put them behind her to focus on her happiness. Katelyn joined the UCLA gymnastics team during the 2015-2016 season, and later opened up in a video for Player’s Tribune about how “broken” the sport had left her in the past. “It took me finding Ms. Val and UCLA and having a different goal and path to follow to finally find joy and love within the sport again,” she said in the video. “I haven’t been able to feel this type of happiness in a long time.” During the 2018 season, Katelyn helped lead UCLA to first place at the NCAA Championships, where she also took home first place for her floor routine.

5. She has plenty of other hobbies besides gymnastics. When she’s not competing or practicing, Katelyn enjoys “writing, poetry, shopping, working with homeless shelters and going to the beach,” according to her UCLA Gymnastics bio. She is a Gender Studies major.