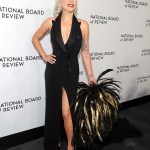 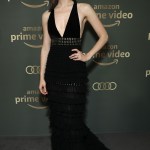 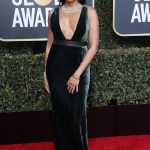 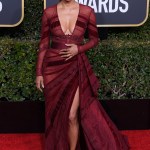 It’s still January but thanks to the Golden Globes and the Critics’ Choice Awards, we’ve already had so many MAJOR fashion moments of 2019. Plunging necklines continue to trend, so we’re rounding up some of the sexiest gowns of the year, so far! Awkwafina wore a gorgeous sequin dress by Elisabetta Franchi at the 24th Annual Critics’ Choice Awards, which took place on Jan. 13. Her Crazy Rich Asians co-star Constance Wu also dared to bare her chest in a romantic Rodarte. At the same show, Elizabeth Olsen wore a plunging Alexandre Vauthier mini, and wore her hair back in a sexy chignon by hairstylist Mark Townsend using Dove products.

Kaley Cuoco was gorgeous in J. Mendel, styled by Brad Goreski. See more plunging necklines from the show in the gallery attached! At the Globes, Taraji P. Henson looked stunning in a velvet Vera Wang gown. Saoirse Ronan was sexy in a silver Gucci. The plunging necklines continued into the after parties as Sarah Hyland wore J. Mendel, Ashley Madekwe was like a fine wine in a merlot gown at the InStyle and Warner Bros Golden Globes after party, and Emmy Rossum went low for the Audi party.

Lady Gaga wore Ralph Lauren at the National Board of Review Awards Gala in New York on Jan. 8. It was a very different look than her dramatic periwinkle Valentino she wore to the Golden Globes. We can’t wait to see more plunging gowns at the SAG Awards, the Grammys, and the Oscars!