Gwyneth Paltrow and Brad Falchuk enjoyed a day out with their kids in Brentwood, CA, Jan. 13! The blended family took a casual walk in new photos, where Gwyn’s son, Moses, 12, looked so grown up! He’s a spitting image of his dad, Chris Martin!

Gwyneth Paltrow, 46, and her new husband, Brad Falchuk, 47, seem to have successfully blended their families after they tied the knot in September! The actress and producer took their kids — her 12-year-old son, Moses and his son Brody — out for a walk in Brentwood, CA on January 13. Gwyneth, Falchuk and the kids were photographed heading to brunch at the Country Mart.

Moses channeled his rocker dad, Chris Martin, 41, and opted for a bright pink hooded sweatshirt, which covered his blonde hair, black Nike sweatpants and sneakers. Brody wore blue Nike pants and a black sweatshirt with matching sneakers. Gwyn’s daughter, Apple, 14, and Falchuk’s daughter Isabella were not present during the casual family outing. She shares Apple and Moses with ex, Coldplay frontman, Martin. Falchuk shares his son and daughter with his ex-wife, Suzanne Bukinik.

It was a casual day out for the family, who all dressed in sweats. Gwyn wore an oversized grey sweatsuit with white sneakers. She shielded her eyes from the bright CA sun with cool black shades. Meanwhile, Falchuk wore light grey pants and a blue hoodie as he fueled up with a cup of coffee. 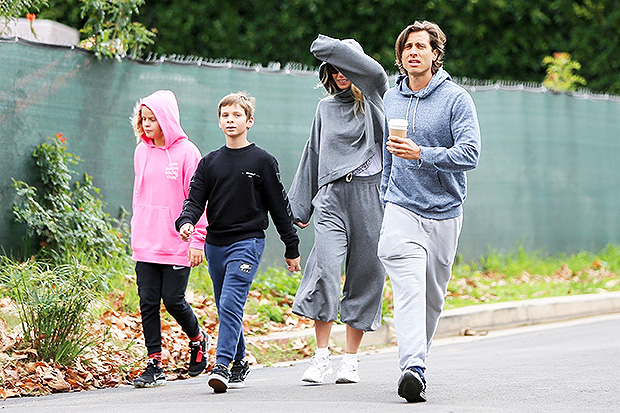 Gwyneth and Falchuk wed in an intimate ceremony at her home in East Hampton, New York back in September. The GOOP founder and her American Horror Story producer husband went for a nontraditional honeymoon to celebrate their marriage. Gwyn, Falchuk, each of their kids, and her ex-husband, Chris Martin all escaped to the Maldives for the couple’s honeymoon.

“We just took our honeymoon in the Maldives and we had a big family honeymoon over Christmas,” Gwyneth told Kelly Ripa, 48, and Ryan Seacrest, 44, while on Live with Kelly and Ryan on January 9. “So, my new husband and his children, my children, my ex-husband, our best family friends [all went]. It was a very modern honeymoon,” she continued.

When Seacrest asked what the typical dinner table banter between the family is like, Gwyneth replied, “Oh, just great conversation and lots of kids and you know what it was great, we had such a good time.”

As for why the actress and her ex have remained to close — she explained that they “just wanted to minimize the pain for the kids.” Gwyneth added, “And they just want to see their parents around the dinner table, basically, so we just try to keep that.”