Anna Faris weighs in on her ex-husband, Chris Pratt’s engagement! The actress commented on Pratt’s big announcement one day after he proposed to girlfriend, Katherine Schwarzenegger! See what she had to say!

Chris Pratt, 39, and Katherine Schwarzenegger, 29, are engaged after just seven months of dating! And, his ex-wife couldn’t be happier! “I’m so happy for you both!!” Congratulations!”, Anna Faris, 42, the mother of his son, Jack, 6, wrote under their engagement photo on Instagram. The actor popped the question to his author girlfriend, who is also the daughter of Arnold Schwarzenegger, 71, with an oval-shaped diamond ring.

Chris was the first to announce the engagement news. He revealed the couple’s relationship milestone in a photo on Instagram early Monday morning (January 14), captioning a photo of him kissing the side of his fiancee’s face, “Sweet Katherine, so happy you said yes! I’m thrilled to be marrying you. Proud to live boldly in faith with you. Here we go!” The Guardians of the Galaxy star’s proposal came amid their Cabo San Lucas, Mexico vacation with the Schwarzenegger family.

Chris and Katherine first stepped out together around Father’s Day in June 2018. While it’s unclear as to how they exactly got together, reports have claimed that it was Katherine’s mother, Maria who introduced them. The actor made his romance with Katherine Instagram (and Twitter) official on her 29th birthday on December 13th. He posted a collage of cute photos of her along with a cute message, thanking the author for “laughs, kisses, talks, hikes, love and care.” 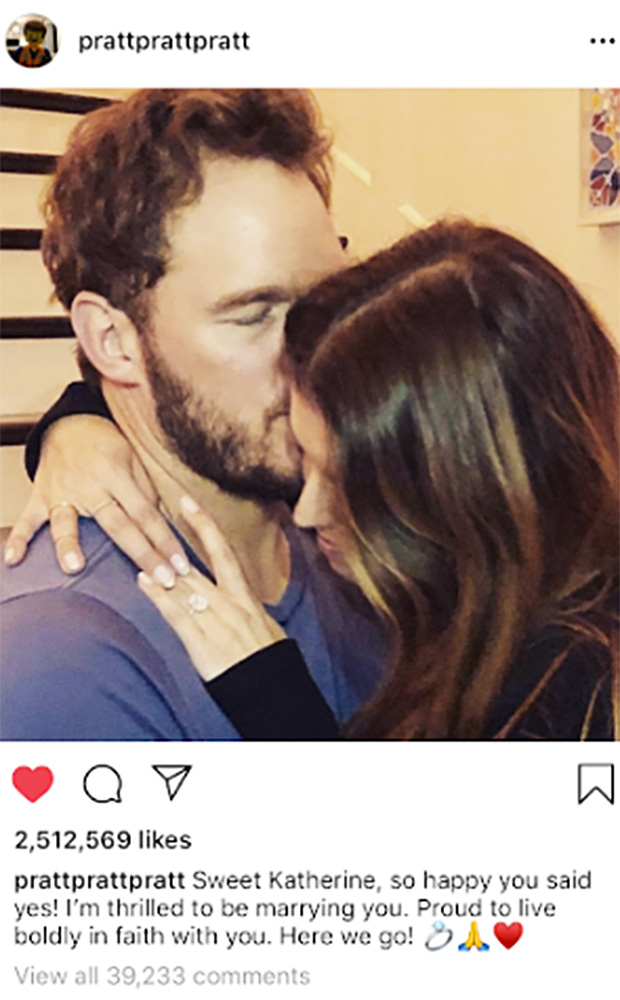 Chris and Anna announced their split on August 6, 2017 in a joint statement on Facebook. “Anna and I are sad to announce we are legally separating,” the statement said. “We tried hard for a long time, and we’re really disappointed. Our son has two parents who love him very much and for his sake we want to keep this situation as private as possible moving forward,” they continued. “We still have love for each other, will always cherish our time together and continue to have the deepest respect for one another.”

The exes, who share one child together, a son, Jack, 6, were married for eight years. Their divorce was finalized in October 2018, and they’ve been getting along wonderfully, while co-parenting. Chris and Anna were recently photographed together, along with their significant others (Faris is dating cinematographer Michael Barrett) when they all celebrated Halloween together, along with Jack!