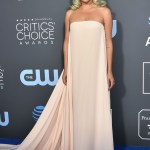 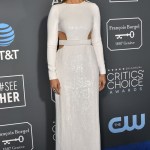 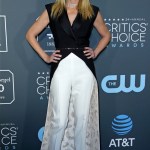 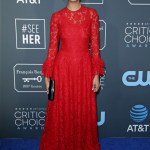 Whenever Nina Dobrev steps out onto a red carpet, all eyes are on her. The ‘Fam’ star wowed in a stunning red dress at the Critics’ Choice Awards right after celebrating her 30th birthday with one epic party!

Nina Dobrev, 30, looked absolutely stunning a long sleeve red dress on the blue carpet at the 2019 Critics’ Choice Awards. The gown featured sheer detailing on the top half of the dress and ruffles on the sleeves. Her hair was pulled up in a messy bun. Nina’s hair looked natural and fresh. She topped off her look with a dark red lip. When it comes to fashion, there’s never a dull moment with Nina!

Nina recently returned to television for her first series regular role since leaving The Vampire Diaries. Nina is currently starring as Clem on the CBS comedy Fam. The series debuted Jan. 10, 2019. Nina is best known for playing Elena Gilbert and Katherine Pierce on the hit vampire drama, but now she’s showing the world she’s got some serious comedy chops!

The actress also celebrated her 30th birthday with an epic party on Jan. 12. She threw a Coachella-inspired bash called “Ninachella.” Many of her Vampire Diaries co-stars like Candice King, Kayla Ewell, and Michael Trevino were in attendance. Everyone had a blast! Right before her birthday party, Nina posted a series of hot bikini photos. “Thank you for all the birthday wishes,” she captioned the photos. “I’ve never felt more Thirty, flirty…and I’m dead set on THRIVING through this next decade.”