Selena Gomez is looking happy and healthy in 2019! The starlet was spotted out with pals horseback riding on Jan. 9. Selena had the biggest smile on her face while out with her BFFs! See the new photos of Selena now.

Selena Gomez, 26, is out and about again! The singer/actress went on a relaxing horseback ride with friends on Jan. 9 and looked like she was having so much fun. Selena and her pals had the most beautiful scenic view of the California mountains. Selena looked cozy in a colorful winter jacket and jeans. She rode a stunning white horse alongside her friends. Her pal Anna Ballins posted a cute photo with Selena and Raquelle Stevens on Instagram.

Selena has been surrounded by her closest friends since leaving rehab in Nov. 2018. She was spotted on a hike with friends just a few days before and wore one of Taylor Swift’s reputation hoodies! Selena’s also been hitting Pilates classes in her spare time. HollywoodLife learned EXCLUSIVELY that Selena is “looking and feeling amazing, she’s doing really well since leaving treatment and she’s really positive about the future.” She entered treatment in Oct. 2018 to help her issues with anxiety and depression. Selena’s health is back on track now after some much-needed time out of the spotlight. 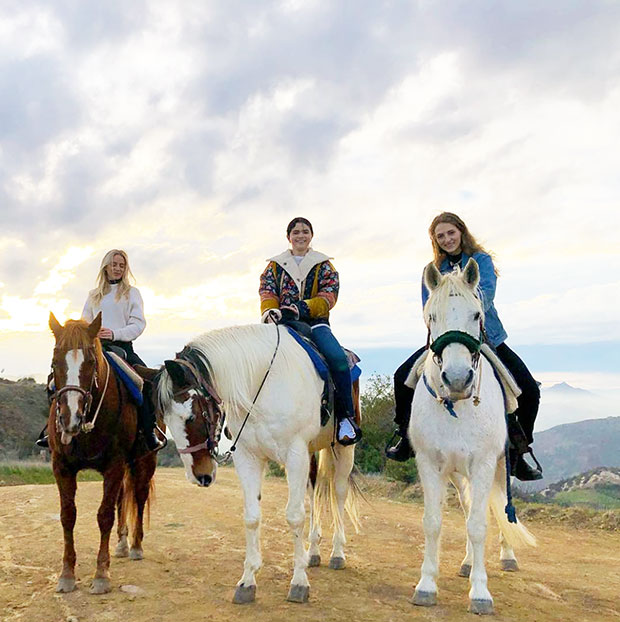 The starlet is planning on releasing new music in 2019. A source revealed to HollywoodLife EXCLUSIVELY that she’s “waiting to release” this new music, and she’s “really excited about it.” In addition to music, Selena’s also got a couple of film projects in the works. She completed filming the horror comedy The Dead Don’t Die in 2018, and the movie is expected to be released in 2019. She is the voice of Betsy in The Voyage of Doctor Dolittle, which also stars Tom Holland, John Cena, Rami Malek, and Robert Downey Jr. The movie is set to debut in 2020.