Rachel DeMita is kicking off 2019 with her NBA family as part of the league’s new Saturday Primetime spot! She tells HollywoodLife about the new commercial and reveals what’s next after four amazing years as the face of NBA 2KTV!

The spot highlights former players, celebrities and fans, including Hall of Famer Walt “Clyde” Frazier, Grammy-nominated rapper and Houston native Travis Scott and social media influencer Famous Los. The commercial also features Grammy-nominated rock band Panic! at the Disco. DeMita, who can be seen lounging at the salon while getting a pedicure, is beyond proud of her role in the new spot. “I was glad I got a girly scene!”, she told HollywoodLife in an EXCLUSIVE interview, adding that she had a ton of fun filming the gig. “The most exciting part was working with the NBA and having them include me. I really feel like part of of the NBA family.”

DeMita recently stepped away from her near five-year hosting position with NBA 2KTV to explore a new chapter in her life. 2K had discovered the former D1 baller (from Old Dominion), from her YouTube channel, in which she had already garnered a massive fan base. As the face of 2KTV, DeMita’s day to day entailed interviewing some of the NBA’s most prominent stars, including, James Harden, Shaq, and Allen Iverson.

On January 19, the first NBA Saturday Primetime on ABC will feature the Philadelphia 76ers hosting the Oklahoma City Thunder at 3:30 PM ET and the Los Angeles Lakers visiting the Houston Rockets at 8:30 PM ET.

But now, it’s time for DeMita to begin a new chapter in her career journey. She recently landed a gig with Overtime, where she reveals she’ll be doing more behind-the-scenes work, along with her hosting duties. “I’m super excited to continue creating content with Overtime,” she gushed. “With what I’m doing with them, it’ll definitely be more personal and I’ll have a lot of creative influence. I‘m excited to create new types of story pieces that really reflect on what I’m passionate about.”

With Overtime, DeMita revealed that she will be able to explore different corners of her work, which will allow fans to get a more up-close-and-personal look at her life. “I’m excited to show different types of creativity,” she explained DeMita described this new creative process with Overtime as “building things from scratch.”

She’s also thrilled to grow with her fan base. “I’m evolving more and more in my career and they are in their lives. — So, I’m excited to take them on my journey as it grows and try different things.” DeMita also said she believes creating diverse content with Overtime will help expand her fan base. 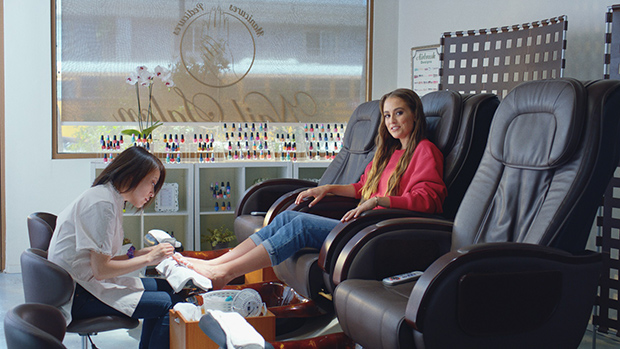 As for what else she’s got in store for fans in the New Year? — DeMita added that she wants to continued to expand her YouTube channel, while stepping into the lifestyle space. “I definitely want to grow my Youtube channel. That really is so personal for me because I really have free reign to create what I want with that. I want to try some new things as well and do some things in the lifestyle space and sports outside of basketball… Maybe creating some documentary-style pieces that incorporate all sports. We even started doing some of those things with Overtime. And, I definitely just want to continue to evolve and figure out what’s next for me after closing that big chapter [NBA 2KTV] and figuring out my passion.”