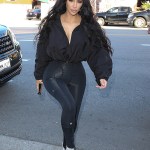 Kourtney just got called out! Kim Kardashian isn’t pleased that her sis didn’t invite her on vacation, and she popped off in the comments on Instagram to let her know! See her seething comment.

Some sisterly drama is brewing on Instagram. Kim Kardashian popped up in the comments on Kourtney Kardashian‘s account to call her out for failing to bring her along on her road trip. Kourt is currently living her best life on a winter getaway to the mountains with their other sister, Kendall Jenner, and they’ve even met up on the slopes with Kylie Jenner and Jordyn Woods. Apparently, Kim’s invite got lost in the mail. Oops! Kourtney posted a pic that showed her getting some roadside assistance in a snowstorm, captioned, “Super helpful on road trips”.

Kim slid into the comments, writing, “Damn! I know how to change a tire. I would have so done this for you guys if I were invited”. Notice the lack of punctuation after “invited”? She is not messing around. Can you imagine Kim changing a tire in a snowstorm in (probably) Yeezys and a bodysuit? Best episode of Keeping Up With The Kardashians ever. We don’t blame Kim for getting upset about missing out on the mountain trip. All Kourtney and Kendall have been doing for the past week is posting photos of how much fun they’re having together. They wore bikinis in the snow, went skiing with Kylie and Jordyn, and drank hot chocolate in a jacuzzi.

Kim’s not just sitting around at home fuming, though. She and husband Kanye West are reportedly expecting another baby via surrogate! Just about a year after baby Chicago West’s birth, they’re reportedly going to have a little boy. Sources told PEOPLE that Kim and Kanye are “over the moon” about the fourth pregnancy, and that the little dude will be welcomed into the world sometime this spring. So exciting!

Can we talk about the comment that Jonathan Cheban left, too? Food God hilariously wrote, “Do you remember us in Everglades??? How does this always happen to you??” He, of course, is referring to the classic Kourtney and Kim Take Miami episode in which they run out of gas pretty much in the middle of a swamp. Oh, it takes us back…