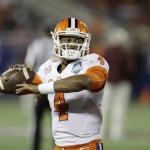 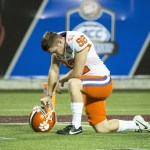 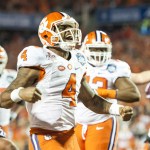 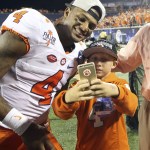 It’s almost time for the big game! Clemson will battle Alabama once again for the College Football Playoff National Championship, so find out how to watch the game online, when it starts and more!

Third time’s the charm, isn’t it? For the third time in four years, the No. 2 Clemson Tigers will meet the No. 1 Alabama Crimson Tide on the field for the College Football Playoff National Championship. The recent series between these two football titans is tied at 1-1, so this is the rubber match. Who will take the lead in this college football rivalry? Will Alabama avenge their 2017 loss, or will the Tigers roll over the Tide? The game, taking place from Levi’s Stadium in Santa Clara, California, starts at 8 PM ET / 5 PM PT so don’t miss a second!

How can you watch the game? ESPN will broadcast the game, so for those with cable/satellite, they can tune in to watch it all go down on that channel. For streaming options, WatchESPN is the sports broadcaster’s streaming portal online, and they’ll also stream the game through the ESPN App. In order to watch, a valid television subscription will be needed. Other streaming services – like Sling TV, Hulu with Live TV, and YouTube TV – also have ESPN, so they’re also a way to watch the big game online.

Who’s the favorite for the game? Honestly, it’s hard to say. Both teams come into this match undefeated (14-0, with Alabama going 8-0 in the SEC West and Clemson going 8-0 in the ACC Atlantic). FiveThirtyEight gives the defending champs, the Alabama Crimson Tide, a 51% chance of winning the title, but NCAA.com predicts that the Tide, who “barely beat Georgia thanks to [quarterback] Jalen Hurts heroics,” will fall to Clemson. Alabama has more yards allowed per game (310.5 versus Clemson’s 247.6) and they’ve allowed more passing yards and rushing yards. While Alabama is better when it comes to passing the ball (Tua Tagovailoa has 3,671 yards for 41 touchdowns) Clemson’s Travis Etienne has more rushing yards, running for 1,572 for 22 touchdowns. Really, this game could go either way – which makes it all more exciting to watch!

Today is the day.

What else will happen? The national anthem will be sung by Andy Grammer, and this year, Imagine Dragons featuring Lil Wayne will perform at the Halftime show. Yes, the college football championship has a halftime show now. It should be a night for the history books so tune in to see who walks away from the game as the national champion!