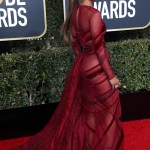 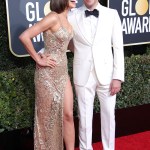 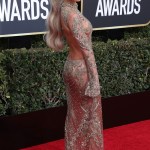 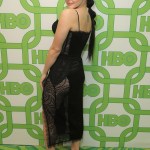 Everyone was dressed to the nines at the 2019 Golden Globes, but one red carpet trend stood up among the others: sheer dresses! See pics of stars like Halle Berry who weren’t afraid to flaunt what they’ve got!

When you think “wild fashion,” your mind probably goes straight to the MTV VMAs instead of the Golden Globes. But tons of actresses proved that they can combine sexy and classy on the red carpet at the first big show of awards season, and they did it masterfully. The trick? Wearing a full gown that’s mostly covered up — except when you look at the back.

Halle Berry is the perfect example! The Kingsman: The Golden Circle star was a vision in a burgundy gown with a full skirt and long sleeves. The swiss dotted number featured stripes of satin and velvet ribbons, as well as a long, velvet train. When she was presenting at the show, it was perfectly SFW. But from the behind… totally sheer! The train saved her from showing too much, but the silhouette of her body was simply gorgeous. Love it!

Supermodel Irina Shayk was at the Golden Globes to support husband Bradley Cooper, who was being celebrated for his film A Star is Born. But she was the talk of the night, instead! Her gorgeous, golden gown was totally tight and sheer. She looked just like the Golden Globes statuette! The dress featured a thigh-high slit, and you could see her perfect body through the metallic lace. Whether he took home awards or not, Bradley was definitely the winner of the night with his wife by his side.

To see more pics of sexy stars who fearlessly flaunted their figures at the Golden Globes — like Kat Graham, Kate Beckinsale, Keri Russell, and even Taylor Swift — scroll through our gallery above!