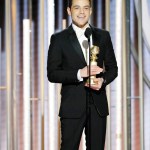 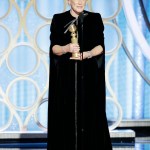 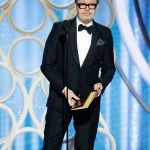 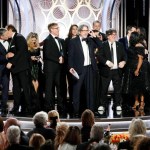 More than two years into their relationship, Taylor Swift and Joe Alwyn have finally attended an award show together — sort of. Taylor showed up as a surprise guest at the 2019 Golden Globes!

Taylor Swift, 29, didn’t join Joe Alwyn, 27, on the Golden Globes red carpet, but she was still there to celebrate his big night! Joe was part of the nominated movie, The Favourite, at the Globes, and Taylor showed up as a presenter at the show. The 29-year-old snuck in mid-show, and presented two music awards during the show. Taylor looked beyond stunning in a strapless black gown, which fell off her shoulders, and she wore her hair in a gorgeous updo to complete the look.

Even though Taylor and Joe weren’t photographed interacting during the event, they reportedly acknowledged each other subtly while she was onstage. “She was smiling at him while she walked off the stage,” according to Us Weekly. “She looked over her shoulder and gave a sassy cute little smile at his table’s direction.” Joe was seated next to Nicholas Hoult, his co-star in The Favourite, and Nicholas reportedly gave him a “pat on the back” when Taylor took the stage.

Taylor and Joe have been extremely low-key about their relationship since they first started seeing each other in Oct. 2016. In fact, news of their romance didn’t even go public until May 2017, and since then, they’ve only been photographed together a handful of times. After her high-profile relationships with stars like Harry Styles, Jake Gyllenhaal, Calvin Harris, Tom Hiddleston and more, Taylor made a conscious decision to keep things with Joe out of the public eye, but it looks like they’re taking small steps toward sharing their love with the world.

Most of Taylor’s latest album, Reputation, released in Nov. 2017, was about finding love with Joe after being shunned by the media and fellow celebrities, like Kanye West and Kim Kardashian. Joe was spotted at several of Taylor’s Reputation tour stops last year, so it’s only fitting that she support him during his biggest moments, too.

Taylor was in attendance at the premiere for Joe’s movie, Mary Queen of Scots, last month, and proudly posted on Instagram about The Favourite when it was released last year. Clearly, she’s a super supportive girlfriend, and we love seeing her by his side at big events like the Globes. Now we have to wonder…will she make appearances at future shows this awards season?!