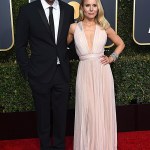 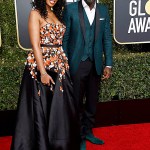 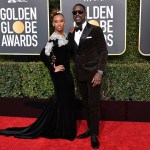 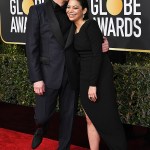 Wells Adams continues to prove he’s the most fun BF ever by helping girlfriend Sarah Hyland stuff the bra of her Golden Globes gown with Kleenex in a hilarious video.

Who needs a push up bra when you’ve got a boyfriend with tissues? Not Sarah Hyland as the Modern Family actress found a clever way to make her bust bigger in her plunging 2019 Golden Globes gown on Jan. 6. She and boyfriend Wells Adams proved to be couples goals once again as they had joined in the fun at the InStyle Globes party. The mag set up an opening and closing elevator and Wells and Sarah had a blast in it. He held out a box of Kleenex for her as she wildly stuffed the tissue in her gown to make her bust bigger as the former Bachelorette star gentlemanly covered up his eyes. She shared the video to her Instagram and fans went wild.

Sarah looked absolutely stunning in a seafoam green long-sleeved gown with a short open front that tapered down to a floor-length skirt. It appears she has some black sequined patterned work on the bodice and sleeves. The petite actress wore high strappy nude high heels and wore her long brunette locks down in waves with a center part. The 28-year-old added diamond drop earrings for some bling, while Wells cleaned up nicely in a black tux.

The couple of over a year is so wildly in love and an eyewitness tells HollywoodLife.com EXCLUSIVELY that “in the lobby before the show they were holding hands and kissed while making their way to their seats.” When Sarah turned 28 in Nov. of 2018, Wells whisked her away to a tropical island vacation. He also shared an Instagram pic hugging his lady and captioned it “It’s that can’t-eat, can’t-sleep, reach-for-the-stars, over-the-fence, World Series kind of stuff. Happy birthday @sarahhyland! You’re perfect and I love you most” before telling her to pack her backs for a warm getaway.