Nicole Kidman, 51, looked absolutely radiant when she attended the Golden Globe Awards on Jan. 6! The actress wore a gorgeous gown and was glowing as she posed for photos upon her arrival to the show. For the high-profile event, Nicole rocked a glistening burgundy Michael Kors gown, which hugged her figure to perfection. The red dress had long sleeves, along with a slit, which allowed Nicole to put her toned legs on display. She completed the look with her hair pulled back into a black bow. Of course, Nicole’s husband, Keith Urban, was by her side as she arrived on the carpet for a very big night. Relationship goals, for sure!

At the 2019 Globes, Nicole is nominated for Best Actress in a Motion Picture Drama for her role in Destroyer. It’s a tough category, and she’s up against Glenn Close or The Wife, Lady Gaga for A Star Is Born, Melissa McCarthy for Can You Ever Forgive Me? and Rosamund Pike for A Private War. Nicole is no stranger to the pressure of having a nomination, though — this is the 14th time she’s been up for a Golden Globe! Just last year, she took home the trophy for Best Actress in a Miniseries or Television Film for her role in Big Little Lies. The show also won Best Miniseries or Television Film at the event. 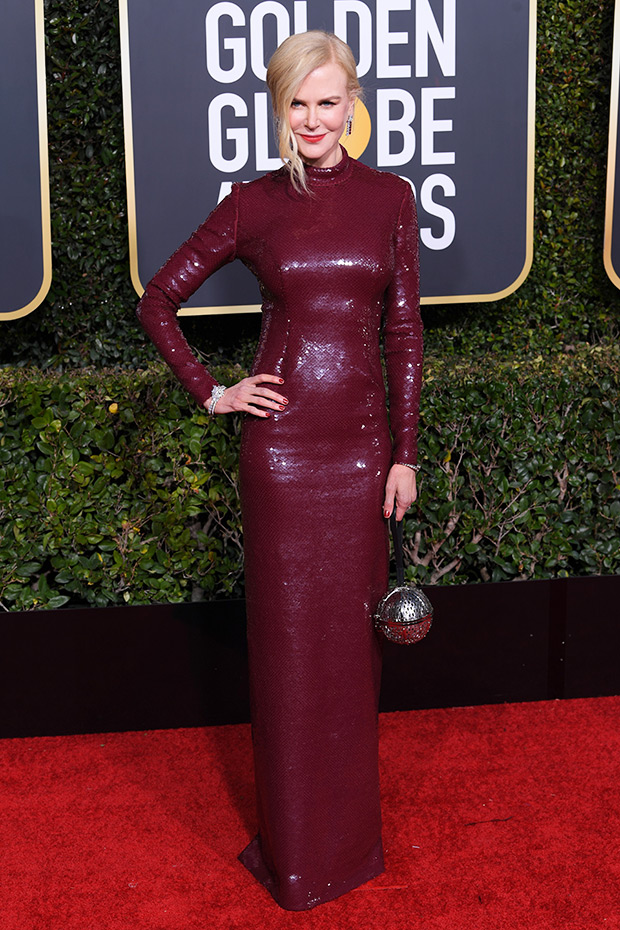 The 2019 Golden Globes are being hosted by Sandra Oh and Andy Samberg, and all eyes will certainly be on Nicole and her fellow nominees when the Best Actress in a Motion Picture Drama category comes up. Win or lose, though, at least she looked AMAZING!

Related: Tom Cruise’s Ex-Wives: Everything To Know About His 3 Marriages To Katie, Nicole, & Mimi