Lady Gaga absolutely stunned in periwinkle at the Golden Globes & fans were quick to point out that she may have been paying homage to the OG ‘A Star Is Born’ actress Judy Garland.

Everyone was anxiously awaiting Lady Gaga‘s arrival at the Golden Globes to see what epic look she would rock to kick off awards season. Of course, the international pop star turned actress didn’t disappoint in a stunning periwinkle gown with a long train and oversized sleeves. While the gown was simply incredible on its own, it may have an even deeper meaning. People were quick to point out that Judy Garland wore a similar, light purple gown while playing Ally in the 1954 remake of the original 1937 movie. The iconic actress stunned in one of the scenes of the ’54 film in a lavender gown and with a velvet shawl and long velvet gloves, very similar to the one Gaga donned at the Globes tonight!

When an Entertainment Tonight reporter pointed out the similarities between Garland’s gown in the film and Gaga’s Golden Globes number, the nominated actress said it was just a coincidence, adding, she “didn’t mean to copy her.” She added to Nancy O’Dell, “[Judy] looks beautiful. This is Valentino Couture custom creation for me. That’s special, except I’m missing the gloves. Thank you for showing me that. It made my night.” What a special coincidence! 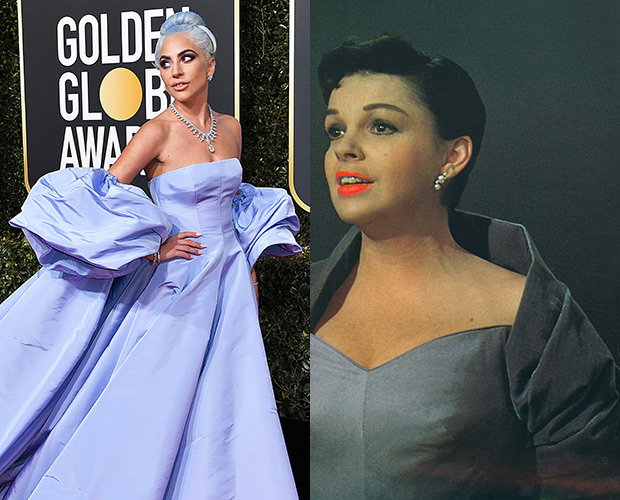 Lady Gaga went on to take home the Golden Globe award for Best Original Song for “Shallows,” and praised her co-star and director, Bradley Cooper, in a tearful speech. “As a woman in music, it is really hard to be taken seriously as a musician and a songwriter,” she said. “These three incredible men… they lifted me up, they supported me.” She added, “Bradley, I love you.” There’s no denying, Lady Gaga was so deserving of this honor and we can’t wait to see the looks she comes up with for the rest of awards season — this is only the beginning!