Jessica Chastain had a red carpet MOMENT at the Golden Globes in LA on January 6! She looked radiant in a black corseted dress that showed off her amazing figure! See her full look here!

Jessica Chastain, 41, is a no brainer for the best dressed list at the 76th annual Golden Globes in Beverly Hills on January 6! She looked breathtaking in a black corseted dress that had a beautiful, sheer, jeweled cape. The bottom of her dress was covered in the same black jewels as her cape. Chastain was what the fashion police would call “red carpet perfection.”

The actress stunned in an assortment of jewelry by Piaget (Chastain is a brand ambassador) — the same jeweler Michael B. Jordan, 31, went with for his Golden Globes ice. She wore her hair up and out of her face, which was the perfect choice to show off her bronzed eyes and red lip. Chastain posed perfectly for photogs, with her hand confidently placed on her right hip. See her full look below!

Chastain, who has a Golden Globe of her own at home, along with four other past nominations, is on hand at this year’s awards show to present. Chastain won the Golden Globe for Best Actress in a Drama Motion Picture in 2013 for her performance in Zero Dark Thirty. Other presenters at the 76th annual Golden Globes — hosted by Sandra Oh and Andy Samberg — include: Michael B. Jordan, Halle Berry, Chadwick Boseman, Kaley Cuoco, Jamie Lee Curtis, Johnny Galecki, Taraji P. Henson, Felicity Huffman, Allison Janney, and Idris Elba. Four-time Golden Globe nominee and Cecil B. DeMille Award recipient Harrison Ford will also present. 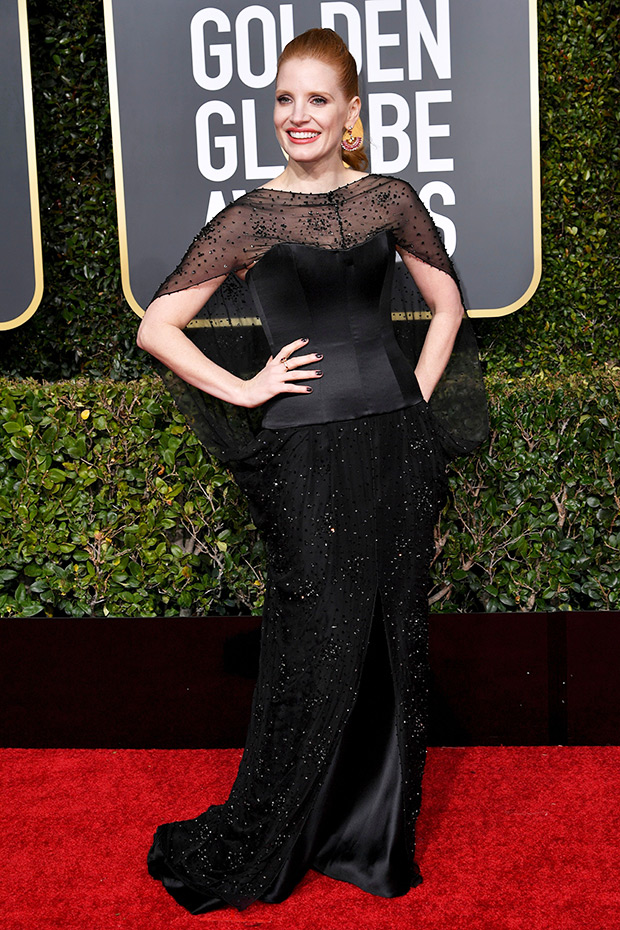 Jessica Chastain on the red carpet at the 2019 Golden Globes in LA on January 6.

The Golden Globes will air on NBC starting at 8 PM ET/5 PM PT, following the red carpet. If you don’t have cable, the show will be streaming on services and devices such as Sling TV, Hulu Live TV, YouTube TV and of course, the NBC app or NBC.com.