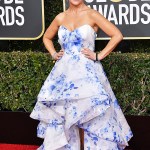 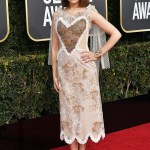 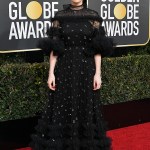 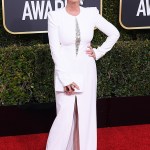 Eeek! We hate to say it, but some stars’ outfits on the Golden Globes 2019 red carpet were a little less than flattering. Check out the wackiest-dressed celebs inside.

Not every outfit is going to be a hit. Unfortunately, some celebs missed the mark a little bit when it came to fashion on the Golden Globes red carpet on Jan. 6. Due to either a clothing mishap, ill-fitting apparel, or something that is a little all-over-the-place, these stars just didn’t get it right when it came to red carpet looks at this award show. While last year’s award show focused less on the fashion, due to celebrities standing up to sexual harassment and mistreatment in the entertainment industry by showing “Time’s Up,” stars came out in full force this year to try and showcase their best looks. And some looks – sorry to say – were not it.

Musician Joanna Newsom, 36, and wife of co-host Andy Samberg, 40, arrived on the red carpet in a dress we didn’t totally love. Her outfit was beige, white, and brown, with lace all over. In the middle of her dress was an outlined darker heart. We weren’t obsessed with it, but we were fans of the hairpiece Joanna added to her hair and her strappy beige heels!

Another celeb, Marti Noxon, 54, known for producing Buffy the Vampire Slayer, walked on the Golden Globes red carpet in a strapless blue-and-white floral dress. Marti absolutely slayed her makeup and hair look, but we weren’t huge fans of the puffiness of her dress! The layers of the dress plus the florals felt like a little much – we think if it were a solid color, it would’ve been a total win!

While Descendants actress Sofia Carson, 25, is absolutely gorgeous, we weren’t over-the-moon for her outfit at the Golden Globes. She wore a dress with a diamond geometric design all over, a black bow in the middle, and a black-framed ruffle top piece. Again, there was too much going on with this dress, and wish she had gone with something a little simpler!

Be sure to check out the rest of the red carpet misses at the 2019 Golden Globes in the gallery above! Hopefully they hit the mark better at the next award show!