Elisabeth Moss may have just had her best fashion moment on the red carpet at the Golden Globes in LA on January 6! The actress looked stunning in a strapless, black tuxedo mini dress with pointed black pumps! See her full look!

Elisabeth Moss, 36, made our best dressed list at the 76th annual Golden Globes in Beverly Hills on January 6! The Handmaid’s Tale star, who is up for an award tonight, wore a strapless, black, tuxedo-style mini dress. Her dress, which featured a buttoned front tule, was tailored to perfection. See her full look below!

Moss paired her ensemble with a pair of simple, pointed black stilettos. She wore silver jewelry, some of which included a diamond necklace and matching earrings. Moss was all smiles on the red carpet, and she had a good reason to be giddy. Taylor Swift, 29, surprised her with a video message on the red carpet during an interview with Ryan Seacrest, 44. The singer gushed over her love for Moss and The Handmaid’s Tale before wishing Moss luck before the awards show.

It’s a big night for Moss, as she’s nominated for Best Performance by an Actress in a Television Drama Series for The Handmaid’s Tale — the terrifyingly realistic drama, which is based on Margaret Atwood‘s 1985 feminist novel of the same name. Moss plays Offred, a woman who’s been stripped of her identity and forced into sexual slavery by the far-right-wing religious extremists who overthrew the U.S. government. 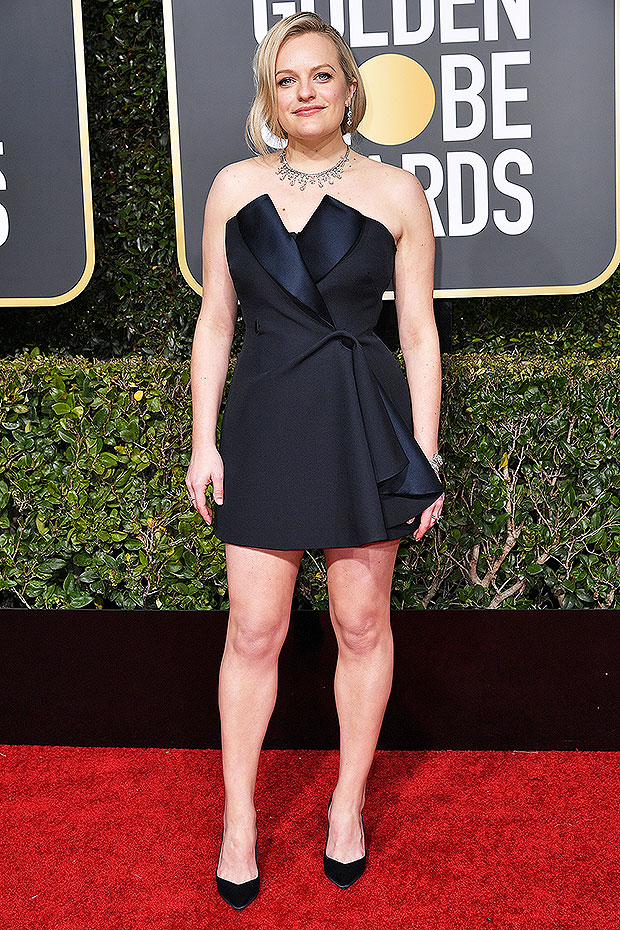 Elisabeth Moss on the red carpet at the 2019 Golden Globes in LA on January 6.

Moss is all too familiar with the Golden Globes stage. In fact, this is the second year in a row the actress is nominated for Best Performance by an Actress in a Television Drama Series for The Handmaid’s Tale. Last year, Moss took home the Golden Globe for the same category. She accepted the award (in 2018) with a quote from Atwood’s book. “We were the people who were not in the papers. We lived in the blank white spaces at the edges of print. It gave us more freedom. We lived in the gaps between the stories,” she quoted before she dedicated the award to the author.

Moss’ big win marked her second Globe. She previously took home the award for Limited Series or TV Movie Actress in 2014 for her work in Sundance TV’s Top of the Lake. In 2011, Moss was also nominated in the Dramatic TV Actress category in 2011 for AMC’s Mad Men.

As a feminist herself, Moss has been candid about how closely she can understand the meanings and different aspects of the book and the show that align with her beliefs. She also dove into detail about how The Handmaid’s Tale is so similar to real-life politics. “I think the worst similarity is the slow-creeping sense that things are normal when they’re not,” Moss told The Hollywood Reporter. “In Gilead there are things that everybody just takes for granted as the new normal and I do feel like that happen in the real world to when people start to get used to something and they get used to having their rights taken away and their freedoms taken away.”