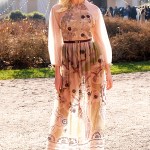 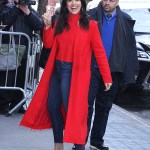 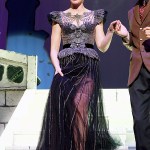 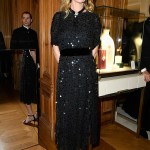 This week was the beginning of the New Year, which meant tons of NYE parties, and lots of sequins! See the best dressed stars this week below.

Sandra Oh was gorgeous in a green satin dress by Fendi promoting the 2019 Golden Globes, which she is co-hosting with Andy Samberg. They playfully rolled out the red carpet together (she did it in Christian Louboutin shoes), before the show on Jan. 6. Jennifer Hudson wore a black and white Self-Portrait mini at The Voice UK TV show launch in London on Jan. 3. Kylie Jenner wore a white tuxedo dress we have previously seen on Meghan Markle.

Of course, this week was also New Year’s Eve, so there were plenty of sparkles and sequins! Olivia Holt stunned in a silver mini on New Year’s Eve at the Apex Social Club Palms Resort & Casino in Las Vegas on Dec. 31. Mariah Carey rang in the new year in St. Barts, performing at club Nikki Beach.

Madison Beer also wore silver sequins at a party hosted by Drake and Mod Sélection Champagne — too bad she couldn’t legally drink it. Tinashe was also at Drake’s party, wearing a bright orange dress. Loved the color! See more stars from this week in the gallery attached above!