Checking out their new $14 million Miami condo caused Kim Kardashian and Kanye West to get the hots for each other. We’ve got their frisky balcony PDA where they made out and he grabbed her booty.

Pricey new real estate seems to be quite the aphrodisiac for Kim Kardashian and Kanye West. He bought her a $14 million condo in a Miami high-rise as a Christmas present and the couple stopped by to check out their new property on Jan. 4. They stood on the balcony and put on a massive PDA display for paparazzi, with Yeezy grabbing on to Kim’s massive booty to give it a playful squeeze while she smiled and seemed to squeal in delight. Smiling is not something these two do very often — Kim has said that she avoids it because it causes wrinkles — but both Kim and Kanye were grinning from ear to ear in delight with their new Miami digs.

And what’s not to love? The 18-story Faena House building, also known as the Billionaire Beach Bunker, is the new home to the couple’s 4,700 square foot pad. The luxury beachfront condo has four bedrooms with five-and-a-half bathrooms and a huge terrace, which Kimye made the most of for their PDA session. The 38-year-old mother of three was seen draping her arms around her husband in delight, even putting her hands on his head and going in for a kiss. This is not a very touchy-feely couple so it was wild to see them so over the top amorous towards each other.

Of course Kim knew the cameras were trained on them as she was seen looking directly at one of the paparazzi shots. Not to mention she was completely photo-ready and dolled up, with a full face of perfectly applied makeup and hair extensions that went down past her butt. Her outfit was also totally attention grabbing as she wore a shiny silver tight mini-shirt that hugged her bountiful booty and a glimmering gold racer back crop top that showed plenty of her tanned skin. 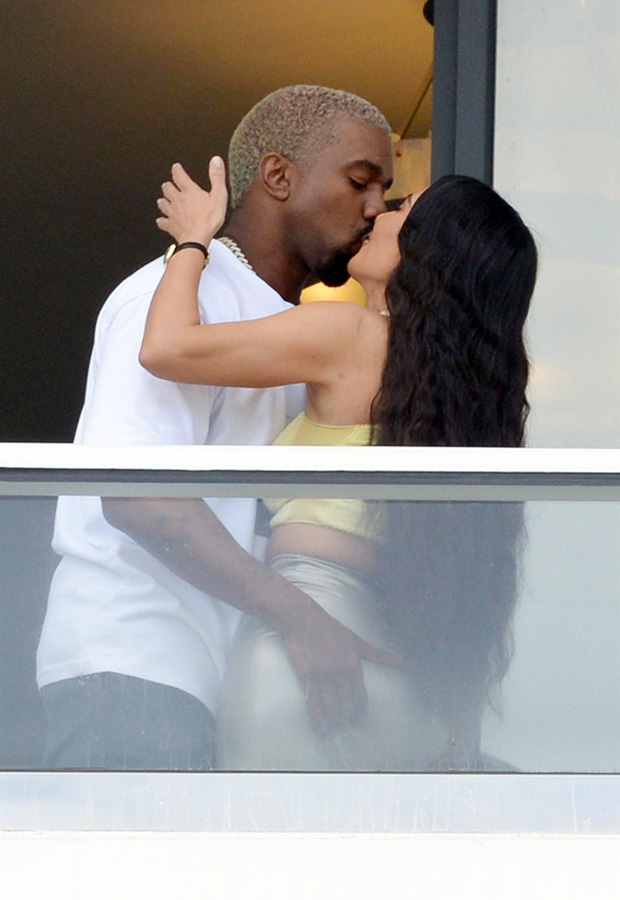 The couple made their way to Miami after spending the New Year’s holiday in Aspen. The steaminess between the pair was on full display in an Instagram photo Kim shared on Jan. 4 where she was seen straddling Kanye, 41, while putting her hands on his chest. Again these two were all smiles in the pic as 2019 seems to have gotten off to a really hot start for the couple’s marriage. They’re reportedly expecting a fourth child — a son — via surrogate this spring so maybe they’re just enjoying their alone time away from their other three kids before the new addition arrives.