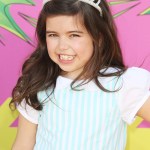 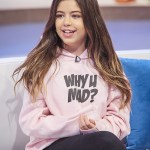 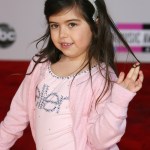 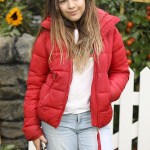 We remember when she was a little girl on the ‘Ellen’ show! See how much Sophia Grace has grown up – check out her new rap video!

Be prepared to feel real old. Remember Sophia Grace Brownlee, 15, and Rosie McClelland, 12? They wore pink princess dresses on ‘Ellen’ and interviewed stars on the red carpet. They rose to fame after their “Super Bass” Nicki Minaj, 36, cover in 2011. Well, Sophia Grace has gone back to her rapping roots in new music video that showed she’s not a kid anymore!

The brunette Brit posted a new video for her song “Can’t Sleep” on Dec. 7,  and the young star looked completely grown up! In the song, Sophia Grace rapped about being different now and she certainly looked the part. But that’s understandable – it has been seven years since she was first introduced to the public! Of course she has changed since then. Sophia Grace swapped out her princess dresses and tiaras for streetwear – she rocked a yellow puffy jacket in the song, with her long brown hair flowing over it. “Can’t Sleep” showed off a more adult sound, and the aesthetics of the video didn’t really scream Disney princess, either. It all around featured a more mature vibe, contrasting with her older tutu fashion choices.

“People say they want me to be the same as I was before,” Sophia Grace said in the introduction of the video. “It annoys me because I’m not that person anymore. And they always ask me to go back to how I was but I’m different and that’s not who I am. So I want to show people that I’m a different person now and that I’ve changed, but that’s okay, ’cause everyone changes.” True that! And she for sure showed that she’s a different person now with this new song.

Sophia Grace also used her full-bodied vocal chops in the song, proving she’s not just a rapper. Maybe a singing career is in her future as well. We guess we’ll have to sit back and see – maybe we’ll witness her perform this song on ‘Ellen’ soon! But something tells us she wouldn’t exactly be rocking a tiara anymore. Check out the rapper/singer all grown up in her new music video above!