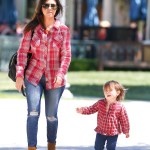 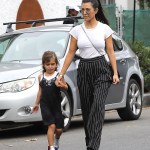 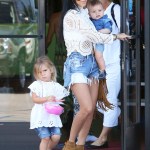 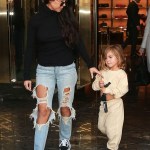 Scott Disick got in hot water after posting a pic with daughter Penelope where some fans accused him of allowing her to be ‘racist.’ We’ve got Kourtney Kardashian’s reaction.

Scott Disick had his first date of 2019 and it was with his precious six-year-old daughter Penelope. Oh boy did an Instagram photo of it cause a ruckus. Scott shared the pic on Jan. 2 from inside an Aspen Japanese restaurant and Penelope was pulling up her eyelids with her fingers. Some fans called it out as racist for allegedly mocking Asians. Mama Kourtney Kardashian, 39, wasn’t there but is horrified and what people are saying about her daughter. “Kourtney thinks it’s absolutely absurd that people are criticizing the photo of Penelope and even suggesting she, or Scott, is racist. When Kourtney saw the cruel comments calling her daughter racist, she was blown away that people are actually attacking a child,” a source close to the mother of three tells HollywoodLife.com EXCLUSIVELY.

Shortly after Scott shared the pic where he had chopsticks in his hand as Penelope pulled on her eyelids, he got called out for the photo. “I’m Asian and that was racist,” wrote one fan while another added “She must have seen someone do it to think it’s okay.” One even asked Scott, “Why is your child racist? Wtf aren’t you a parent?” while another told the 35-year-old that he “could have chosen a different photo.”

“Kourtney isn’t upset with Scott at all because they both know that Penelope doesn’t have a racist bone in her body, and that she was just being playful and sometimes acts like a goofball. Kourtney doesn’t blame Scott because she knows he never would have viewed the photo that way either. Penelope was simply making a funny face and it had nothing at all to do with poking fun at Asian people or their culture. Particularly being raised in a family of mixed race, Penelope doesn’t view other races any different from her own,” our insider continues.

After the original barrage of criticism calmed down, many die-hard fans of The Lord came to his rescue. “It’s just a kid being a kid!! Period!!! Stop making it racist!!!! Ugh!!!!” one person commented while another wrote “Lmfaoo I’m Asian and I can care less. Honestly I don’t find it offensive at all, she’s a six-year-old kid having fun. Next thing you know kids will be slammed for sticking their tongue out.” Many pointed out that Penelope wasn’t pulling on the sides of her eyes but rather lifting them upwards, comparing it to a scary scene in the Netflix thriller Bird Box. “Racist? It’s more like mocking Bird Box grandma’s scene, now that’s way more accurate!” one fan added. Yikes! Bird Box is awfully scary for a six-year-old to be watching it.