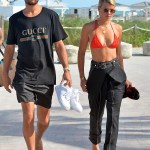 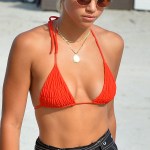 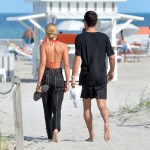 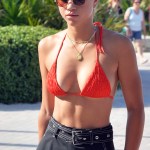 Sofia Richie spent the last days of 2018 with boyfriend Scott Disick and the Kardashians in Aspen, but was particularly nervous for one reason when she got the invite. HL has the EXCLUSIVE scoop!

Sure, Sofia Richie vacationed with boyfriend Scott Disick, along with his ex-girlfriend Kourtney Kardashian and their three children, in Cabo San Lucas, Mexico in Dec. 2018. But the warm-up getaway wasn’t enough to ease the 20-year-old model’s nerves prior to the Kar-Jenner trip to Aspen, Colorado, where she celebrated New Year’s Eve with Kourtney’s immediate family! “Sofia still had a few feelings of anxiety as she joined Scott with the entire Kardashian family on their vacation to Aspen,” a source close to Sofia EXCLUSIVELY tells HollywoodLife. “Although Sofia is starting to feel more comfortable with Kourtney, and even attended their holiday party, she couldn’t help but feel a bit intimidated spending one-on-one time with their whole family.”

Unlike the trip to Mexico, more of Kourtney’s relatives (and one in-law) tagged along for this trip: Kim Kardashian, Kanye West and Kendall Jenner! Unfortunately for Sofia, one sister couldn’t make it to the ski resort town. “Sofia had hoped Kylie was going to be on the trip too since they’ve been friends for a long time, which would’ve made her feel a bit more comfortable,” our source reveals. Luckily, Scott made up for the awkwardness! “However, Sofia did appreciate Scott taking some time away from the whole family to spend alone time with her,” our source continues, adding that “those were some of her favorite moments in Aspen.”

Really, Sofia’s just thrilled that she’s finally able to hang out with Scott and his Kar-Jenner clan. Recall that the family wasn’t too thrilled about Sofia and Scott’s relationship when they first got together in 2017! “This time last year, Sofia never imagined she’d be included in the holiday celebrations and vacations with the Kardashian family this time around,” our source explains. “Sofia felt she has gone above and beyond to try to bridge the gap between her and Kourtney and it’s finally paid off. Sofia has shown Kourtney how much she cares about her kids, and about Scott.”

And it was Kourtney who finally warmed up to the relationship, according to a report! As we’ve told you, she wants life to be “as normal as possible” for her and Scott’s kids Mason, 9, Penelope, 6, and Reign, 4, “especially around the holidays,” as a source told Us Weekly.

But it’s just the beginning for Sofia and Kourtney’s friendship. “Their relationship is new and developing, so it will still take some time for Kourtney and Sofia to feel entirely comfortable hanging out with each other,” our own source goes on. “But they’re both determined to leave the negativity behind in the new year and show they’re mature enough to all get along.”