No dad bod here! Mark Wahlberg is a workout fiend and its paid off. The hunky 47-year-old actor showed off his buff body on the beach in Barbados and we’ve got the shirtless pic.

Mark Wahlberg is a very busy man with his acting and producing careers, wife and four kids, and his various entrepreneurial efforts. But he is always in the gym before 4am for a brutal daily 90 minute workout session and at age 47 he’s looking just has ripped as he did in his 20’s. The Mile 22 star went shirtless in light blue trunks for a swim in Barbados on Jan. 2 and his dedication to fitness showed. Mark’s still got his six-pack abs, a super toned torso and well-defined pecs and arms. He rocketed to fame thanks to being a Calvin Klein underwear model in 1992 while a 20-year-old aspiring rapper, and 27 years later Mark still has that same cut body.

The actor is enjoying the holidays in Barbados along with wife Rhea Durham and their four children. He looked incredibly sexy emerging from the surf wearing just his light blue trunks, a watch and several bracelets. His hair was soaking wet and at one point he was photographed goofing around in the water with his 12-year-old son Michael. Mark posted an Instagram video on New Year’s Eve where he was extolling how 2019 was going to be even better than 2018 and in it he was wearing only shorts prompting Rhea — who was filming it — to tell him “I hope you find a shirt” in the new year! He noted he was on vacation and she playfully asked “what are the other excuses? What about the other times” he goes shirtless.

In September of 2018, Mark revealed the absolutely grueling schedule he has to maintain his incredible body. A fan on IG asked him about his fitness routine and the deeply religious Transformers star said that every day begins at 2:30am and that he spends half an hour from 2:45am to 3:15am to pray. Then it’s on to taking care of his body with a 3:15am breakfast. 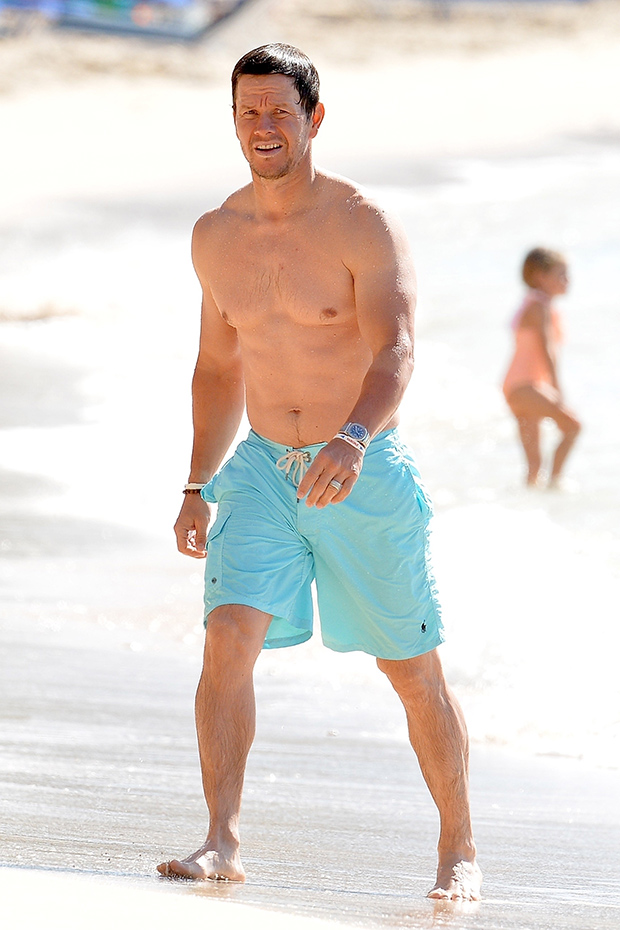 “I start out with steel oats, peanut butter, blueberries and eggs for breakfast,” he revealed in the video “Then I have a protein shake — Performance Inspired Nutrition Vanilla Latte Shake — three turkey burgers, five pieces of sweet potato.” He needs it because from 3:40am to 5:15am he hits the gym, doing everything from weight training, vertical presses and reverse lunges. He’s so committed to his daily workouts that he tags himself as part of the #4amclub on his exercise videos. Even when he’s on the road, Mark will get gyms to open for him before regular hours. In August of 2018, he shared at IG video at NYC’s Equinox gym thanking the owners for letting him have a private pre-dawn workout session at 3:40am. That’s dedication!