Cardi B is topless in Hawaii… in bed… with pink hair! The “Money” rapper”, 26, shared a nearly nude selfie to Instagram on Friday, December 28, where she lounged in bed. Cardi stuck her tongue out and showed off her bronzed cleavage, which was decorated with her diamond “Kulture” chain. Her messy pink hair and mint nails matched her shimmery eye shadow in sultry selfie. See it below!

It appeared as though the new mom needed a little R&R after her show. Cardi was in Hawaii for a performance on Thursday (December 27) at Aloha Stadium for the Dream Weekend Festival, where Snoop Dogg and Sublime also performed. The Grammy-nominated rapper recorded a boomerang of herself with her tongue out, while she modeled a traditional Hawaiian leis around her neck. The next morning, (Friday, December 28), Cardi jetted off to Australia for her New Year’s Eve performance. She will headline the Origins West hip hop festival in Perth on NYE, before she jets to the other side of Australia for her sold out New Year’s Day Festival performance in Sydney. Cardi will then travel to New Zealand on January 2, where she is headlining the 20,000+ sold-out North and South Bay Dreams festival.

NYE’s, on the other hand, would have worked out perfect for her estranged husband, Offset, 27, who was supposed be performing at the same gig down under with his rap trio, Migos. However, the group pulled out at the last minute, and they will now perform at Miami’s Ultraclub E11EVEN on December 31. And, we heard that although Cardi is standing her ground since she left him following more cheating allegations, she’s still a little upset. “Cardi is a little heartbroken that she won’t be spending NYE with Offset because they were supposed to be doing this trip to Australia together, a source told HollywoodLife EXCLUSIVELY. However, she’s not giving in to Offset’s endless attempts to win her back. 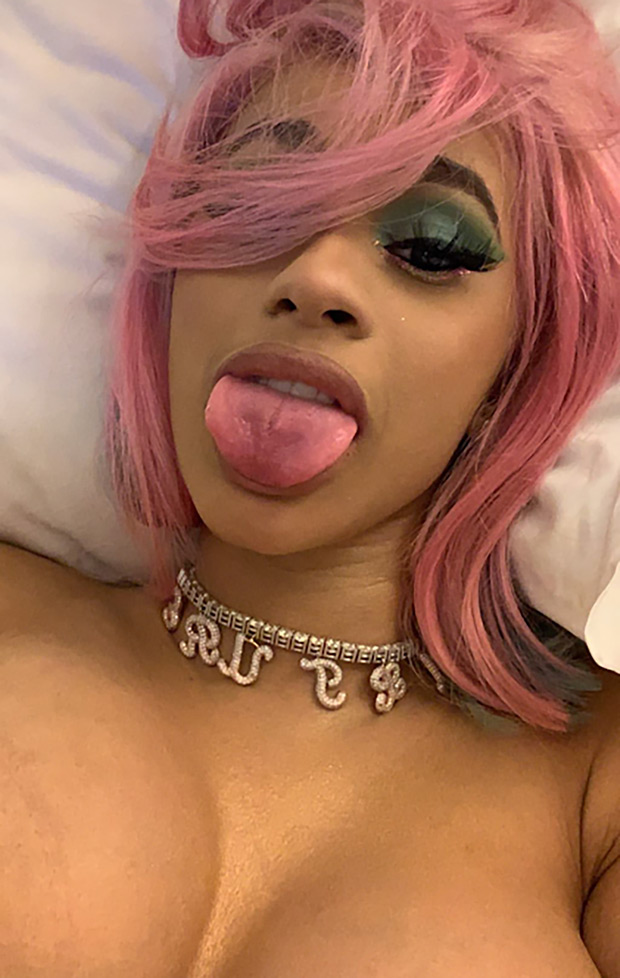 Cardi B poses topless in bed while in Hawaii on Friday, December 28, 2018.

“She’s still a long way from forgiving him for everything, so in a way she’s glad she’s far away and he’s forced to pay some consequences and be left missing her on New Year’s Eve,” the insider added. So, maybe the scheduling switch-up was a blessing in disguise.

Offset and Cardi recently reunited in Puerto Rico just before Christmas, where Cardi had a show in San Juan at the Electric Holiday festival on December 21. They were photographed riding a jet-ski together, and they were reportedly acting like they weren’t broken up. But, when fans asked Cardi if she was back with Offset, she claimed on Instagram Live that she only reunited with him because she needed to get “f–ked.”

Offset has been on an apology tour to win Cardi back ever since she announced their split in a now-deleted video on Instagram. While Cardi never gave a concrete reason why she ended things, Offset was accused of cheating (again) around the same time. He later posted a public apology on Instagram, where he fessed up to “entertaining” other women, and begged for Cardi’s forgiveness. In the video, Offset apologized to Cardi and vowed to change his ways. The estranged husband and wife welcomed their first child together, a baby girl, Kulture, in July.