50 Cent just did the most 50 Cent thing ever. — He washed his brand new red Ferrari with champagne and lucky for you, he got it all on video! Watch him explain why  he cleaned his new whip with champagne…

You learn something new everyday! According to 50 Cent, 43, when “rich people” have nothing to do, they wash their expensive cars with champagne. And, that’s exactly what the rapper did in a video on Instagram, December 27. He doused the hood of his red Ferrari in champagne and proceeded to wipe it down with a white towel! Watch the wild video, below!

“What’re you doing, man?”, a friend in the video asks. “What do you mean, ‘What am I doing?’ I’m washing my car man,” 50 replies, as if the task is a common chore. “This is what rich n—as do when we don’t got nothing to do,” 50 explains. His friends laugh in the background of the video as one declares, “That’s some fly sh-t.” — And, fans in the comments agreed!

“I love this dude yo,” one fan wrote in the comments, adding that the producer is “so f–king original and real.” Another added: “I love your crazy a**”. Many fans raved over 50’s comedy skills in the comments and referred to the producer as a “boss”. One fan even offered this advice: “It’s better then drinking that stuff”. 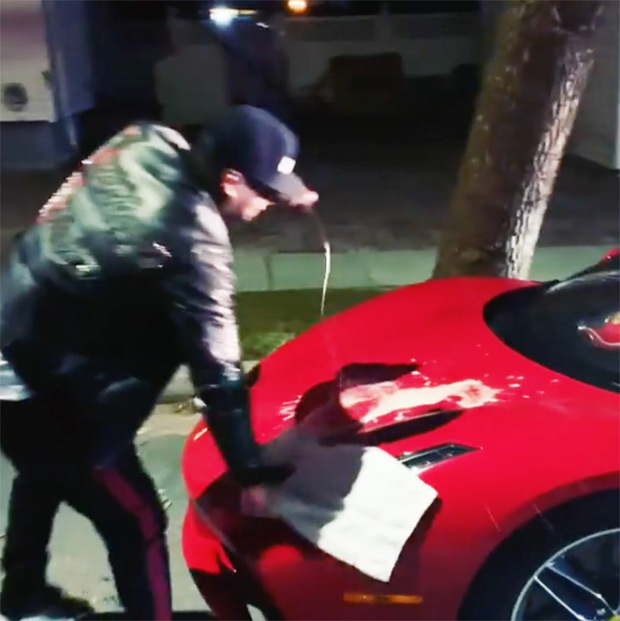 50 Cent washes his red Ferrari with champagne in a video on Instagram, December 27, 2018.

Then, there were fans who disapproved of 50’s “dumb” actions. “Smh. 50 needs something to do with himself,” one person wrote. “How old is he?” Another fan said, “You inspire the dumb to be dumber”. Many people even pointed out that the champagne could be bad for the paint on his new Ferrari.

And, it wouldn’t be a comments section of mixed emotions without the fans who cracked some jokes! “Can I have some money,” one asked. Meanwhile, a lot of people remixed the video and said they’d douse their own cars in the alcohol of their choice. “Well let me get a 40 and wash my lil sonata,” one fan commented. Will 50’s champagne Ferrari video actually become a trend?

The Power producer purchased the red Ferrari on Wednesday, December 27, as seen in a separate video on Instagram. He declared that the new whip was his “Wednesday car,” and that he’d only drive the Ferrari on that day of the week. Must be nice!