Sarah Hyland, 28, and Wells Adams, 33, hit the beach to close out their Christmas holiday together! The couple posed for a cute selfie in the sand, where the Bachelorette alum posed shirtless behind his actress girlfriend. The two flashed a subtle smile as the sun beat down on their fresh faces. “Closing up another year with this one by my side. My [heart],” Hyland captioned the selfie on Instagram, December 27.

The pair, who began dating in late 2017, spent Christmas together with some of his family. Hyland posted a photo with Adams and other loved ones (presumably his relatives) with their pets in matching Christmas pajamas on December 26. And, they took things to the next level when they dressed up as characters from the holiday classic, A Christmas Story. This has got to be a new tradition for them!

In the photo, Adams donned a light pink bunny suit that’s reminiscent of the one Ralphie wore in the movie. Meanwhile, Hyland held a BB gun (which Ralphie asked Santa for in the movie), with a fur jacket on. She even added a spot under her eye to symbolize the film’s iconic line, “You’ll shoot your eye out!” And, it was Adams’ caption that made the photo truly epic. “She shot her eye out… Merry Christmas everyone! Now go drunkenly talk politics with your family and start a fight,” he wrote under the photo. 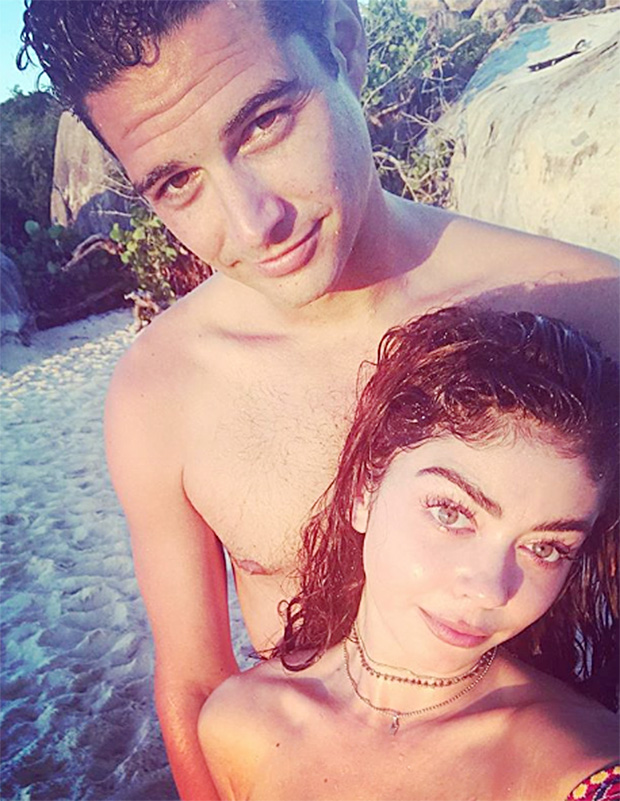 Sarah Hyland and Wells Adams take a selfie at the beach on December 27, 2018.

The Modern Family actress and the Bachelorette star first sparked romance rumors over Halloween in 2017, when they dressed up in Stranger Things-inspired costumes. Since then, Hyland and Adams have been inseparable, posting cute photos together on social media.

“We met each other for the first time three days before my [kidney] transplant,” Sarah told SELF in an interview published on December 10. “He was texting me in the morning before I went into surgery, and we were FaceTiming the entire time I was in the hospital.” Now, it’s been over a year since her second kidney transplant surgery (in September 2017), and she’s focused on her health and work. And, Hyland’s undeniable support from Adams has been nothing short of incredible!