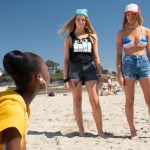 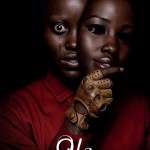 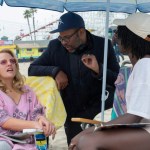 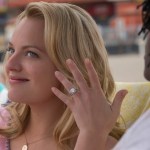 Jordan Peele is back and ready to scare you — again. The very first trailer for ‘Us’ dropped on Christmas Day, and it’s going to haunt you for days. Watch the trailer now!

Jordan Peele, 39, is blessing us all with a brand-new nightmare, and it’s simply titled Us. His highly-anticipated Get Out follow-Up will be released in March 15, 2019, and the first trailer is all kinds of terrifying. Details surrounding Us have been kept very, very secretive until now. The film, starring Oscar winner Lupita Nyong’o, 35, Winston Duke, 32, and Elisabeth Moss, 36, follows a mother and father who take their kids to a beach house to spend time with friends. However, things take a turn when visitors arrive unexpectedly. In the trailer, all is well on the beach vacation until uninvited guests appear at the family’s doorstep: possessed, scissor-wielding doppelgängers.

Ahead of the first trailer, Jordan unveiled the mysterious and terrifying poster for his new and exciting movie. The poster features a person wearing a red outfit and one leather fingerless glove. The person is holding a pair of golden scissors. “Watch yourself,” Jordan tweeted along with the poster. Lupita also teased in a tweet that Us is “beyond your wildest nightmares!”

Jordan opened up about tackling his latest movie in a brand-new interview. “For my second feature, I wanted to create a monster mythology,” he told EW. “I wanted to do something that was more firmly in the horror genre but still held on to my love of movies that are twisted but fun.” The release of Us will come just over two years after Get Out. The horror film, which starred Daniel Kaluuya, 29, Alison Williams, 30, Catherine Keener, 59, and Bradley Whitford, 59, became a massive hit, earning over $250 million at the box office. Jordan also won the Academy Award for Best Original Screenplay. The 2017 movie was Jordan’s feature-length directorial debut. Get Out was also nominated for Best Picture, Best Director, and Best Actor in a Leading Role.