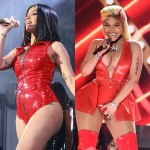 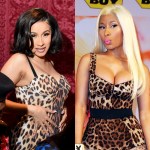 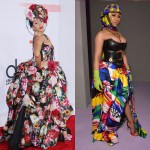 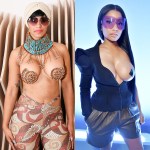 Cardi B absolutely slays in her new music video for ‘Money,’ & her costume designer spoke exclusively to HL about the inspiration behind Cardi’s seven outfit changes!

Cardi B’s music videos are always a production, and the visuals for her hit “Money” were no exception! The rapper’s costume designer Laurel DeWitt, who designed some of the looks for the new video, told HollywoodLife EXCLUSIVELY about the inspo behind Cardi’s outfits, saying, “Cardi had seven different looks for her new music video, “Money.” The inspiration for the looks was money. Cardi wanted gold and rubies because her favorite color is red.” “All of the looks were inspired by some of Lil’ Kim‘s looks. Cardi definitely pays homage to Lil’ Kim in the video, which is cool about her,” Laurel added.

The one look in particular that is definitely reminiscent of Lil’ Kim’s 1997 MTV Music Video awards look is a scene in which Cardi is dripping in gold, rocking a gold bikini and gold headpiece, looking lke Cleopatra. Cardi took the IG to make note of her fashion inspo, sharing the exact, iconic outfit of Lil’ Kim from the ’97 awards show. “Walking pass the mirror whew! Damn she fine!” the rapper captioned the pic. Interestingly, this comes days after Cardi’s rival, Nicki Minaj, was slammed for “copying” Lil’ Kim, who Nicki also notably has beef with.

The “Chun-Li” rapper posed for Vogue Japan, and fans pointed out a fake mole on her face, similar to Lil’ Kim’s real mole in the same spot. Wearing a Burberry red coat, a white button-down and yellow nails, trolls claimed Nicki was copying her rival’s looks, even Lil’ Kim’s stylist, Tim B, chimed in! “If you never seen the movie single black female you need to go & watch it… because this is what the situation is!” he wrote on IG. “At this point I’m scared for my friend @lilkimthequeenbee. Shorty out here rocking a mole & all. shorty stole her style, management team and now her mole.” Yikes.

However, Laurel promised that Cardi’s tribute to Lil’ Kim has nothing to do with Nicki. “Cardi knows to give credit when credit is due and Kollin (Carter — her stylist) makes sure to do that as well. Kim is the original! Kim was the first to bring high fashion looks to the hip hop world through her stylist Misa Hylton. Everything she did was iconic and that is evident as she inspires so many stylists and designers like myself and Kollin. Many of her looks are the blueprint for female rappers today,” Laurel said, adding, “Cardi and Kim are both fearless and not afraid to be exactly how they are — raw and uncut.” We agree with that!