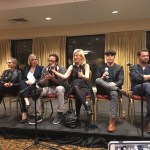 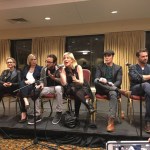 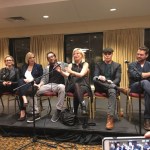 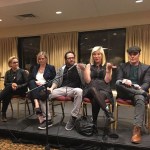 The OGs of the ‘Beverly Hills, 90210’ cast were spotted together in Los Angeles on Dec. 19…see who made it for the coffee date! Here’s what the rumors are saying about a potential reboot.

Nope, we’re not talking about the cast of the revival series in 2008. Original cast members of Beverly Hills, 90210, who made their debut on Fox in 1990, reconvened at a Coffee Bean & Tea Leaf in Los Angeles on Dec. 19! Pictured were Jennie Garth (Kelly Taylor), Tori Spelling (Donna Martin), Jason Priestley (Brandon Walsh), Ian Ziering (Steve Sanders) and Brian Austin Green (David Silver). They were snapped sitting around a table and later crossing a sidewalk! SEE THE PICTURES OF THE BEVERLY HILLS, 90210 REUNION HERE.

Luke Perry and Shannon Doherty were MIA from the reunion, but there’s still major buzz of a reboot in the works! The idea is “being pitched to broadcast and streaming networks with multiple buyers interested,” sources told our sister website, Deadline. And they also claim that Gabrielle Carteris, who played school newspaper editor Andrea Zuckerman, is also in on the rumored project! Of course, it’s safe to presume that the stars — who are now mostly in their 40s — won’t reprise their roles as high school students.

“I hear the scripted project from CBS TV Studios features most of the original cast but is not a traditional reboot,” Deadline’s Co-Editor-In-Chief, Nellie Andreeva, claimed. “I hear the new Beverly Hills, 90210 comes from writers/executive producers Mike Chessler and Chris Alberghini, who worked on the CW’s 90210 reboot and on Spelling’s series So Notorious, as well as CBS TV Studios-based Ghen Maynard, who has a relationship with Spelling and Garth and executive produces the new series.”

Tori spilled the beans on a 90210 reboot with an Instagram post in March, as you can see above! “#back2work great creative day yesterday with my #partnerincrime @jenniegarth,” she wrote, adding hashtags like #90210vibes and #donnaandkellyforever. The original series aired on Fox from 1990 to 2000, and CW did a revival series from 2008 to 2013. Jennie, Shannon and Tori reprised their roles for the first season.