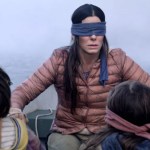 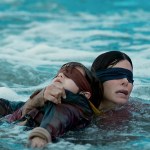 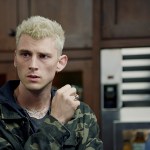 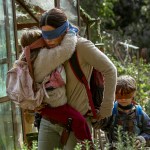 Sandra Bullock’s ‘Bird Box’ has officially debuted on Netflix. Before you sit down to watch, here’s what you need to know about the epic thriller that everyone’s talking about!

Bird Box, based on Josh Malerman’s 2014 novel of the same name, made its highly-anticipated Netflix debut on Dec. 21. Sandra Bullock, 54, stars in the all-new thriller, her second project of the year after Ocean’s Eight. Bird Box marks Sandra’s first Netflix project. So, what is Bird Box about? Check out these 5 key facts about Bird Box below!

1. Bird Box is a post-apocalyptic film that features one woman’s quest to stay alive. A mysterious force begins to take out the world’s population, and if you see it, you take your life. Malorie and her two children flee down a river to the one place left to possibly take refuge. However, in order to survive, they must go on this terrifying two-day journey blindfolded.

3. The movie is told in two timelines. The first timeline focuses on the past, as pregnant Malorie finds emergency shelter in a house filled with other survivors. The second timeline is in the present day, as Malorie and her two young children row down a harrowing river in a tiny rowboat while blindfolded. They’ve only got themselves and a bird in a box as they head towards an uncertain future.

4. Sandra worked with a blind man to help her with the role. “He taught me how to trust what we already have the ability to sense, but it’s just that we just don’t use that ability most of the time,” Sandra said in a statement. “He walked into my home and he goes, ‘that wall is about four feet from me and the one above me is about nine feet.’ He can tell you if there’s a house across the field. He can sense a fence. He rides a bike. He was a runner. He showed me that a lot of it is intuition. You can’t put your finger on it, but if you’re close to an object, you can sense something there. It’s almost like radar.”

5. Sandra said that her kids “liked” her better while filming Bird Box. With embracing Malorie’s mindset, Sandra had to “imagine family dying, your children dying, or the love of your life dying,” she told our sister site Variety “But by the time I went home by the end of the day, I was so grateful I didn’t have to think those horrible thoughts, that I think every day as a mother in general out of fear. It was cathartic. I purged them. I got to go home [and] I think my kids [Louis and Laila] liked me better because I wasn’t so scared and militant and fearful.”